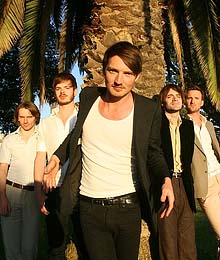 The Feeling have a second album ready to go.

Here are ten essential facts you need to know about that new The Feeling album.

1. Despite the more in this instance is most def­in­itely more approach to 'I Thought It Was Over', the song has managed to convert the few people we know who did not like The Feeling pre­vi­ously to fans of The Feeling and has not made previous fans of The Feeling now hate The Feeling. An all round success and amazing first single from the album.

2. ELO by numbers 'Join With Us' is totally amazing and that is not only due to the alarm clock intro­duc­tion. Let's have a listen to the sound which wakes Dan Gillespie Sells every morning:

3. Track four is too early for a ballad. 'Spare Me' is not better than 'Rose' either, so we would have shunted this one towards the end of the album BUT WE WERE NOT ASKED SO WE SHALL KEEP OUR NOSES OUT.

4. Track five is probably the right place for the best song on the album, 'Turn It Up' takes all the best bits of every The Feeling single to date ('Rose' not with­stand­ing) including the dance­ab­il­ity of 'I Thought It Was Over' and the ten million hooks of 'Never Be Lonely' for what is poten­tially the biggest and best The Feeling song to date. Even the guitar solo is not shit.

7. 'Connor' is something about 'a simple gift for every boy and girl' which you might think would be a Nintendo Wii but is instead something much ruder. Apparently this Connor bloke 'showed them all that giving can be fun' — which is quite obviously about sexual shenanigans.

8. Unlike 'Spare Me', track ten is the perfect time for a ballad. One with horns too. And an orchestra. And a harp. Not enough harps in music, same applies to recorders and the triangle.

9. 'The Greatest Show On Earth' is not, as the name might suggest, about Dragons Den. It does not specify which show is in question but it is probably not My Family or The One Show. 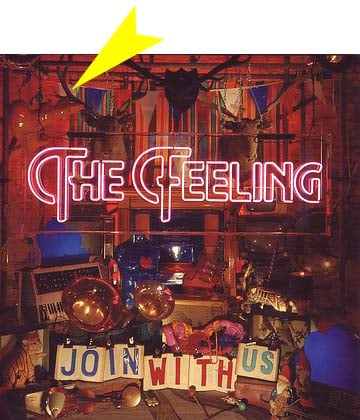 All things considerd, we give the album a well con­sidered 7.5/10.

Things you will learn from our Featuring Sarah Cracknell interview

What's happening on the Radio One playlist?