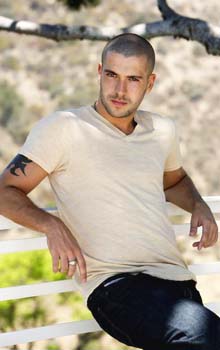 "We decided not to use the dwarves in the end."

Shayne Ward talks about how exciting his new album is…

Ladies and gentlemen, it's Shayne Ward.

He won X Factor, had some hit singles and then went away. But now Shayne Ward has a new album to promote and from what we have journ­al­ist­ic­ally deduced he's quite excited by the whole thing…

Hello Shayne Ward. If you were inter­view­ing Shayne Ward, what would you ask him?
I would ask him how excited he was about the release of his new album.

That's quite a boring question.
Yes, but I'm very excited and I'm looking forward to everyone hearing it.

Would you be happy if the album sold fifty copies but if NME gave it 9/10?
No. Definitely not.

So critical acclaim is not on the agenda?
I want to sell 50,000 copies in the first hour, not 50 copies. Sales are a big thing to me and I want people to support me that way.

Do you think Max Martin really gave you any of his best songs or was he probably saving the good ones for people who'd sell him more records?
I don't think he would just write me any old song — he has to have his heart in it and that's exactly what he did. When he was working with me he seemed abso­lutely buzzed up to be doing pop music again.

Is 'If That's Okay With You' not more of a producer's track than a singer's song?
I don't think I need to belt out every song I do to prove I can sing. You'll hear other songs on the album where I really do showcase my talent, this single is to show people that I can do different styles of music.

It certainly will. Do you not think it is going to be a struggle to change how people think of you?
No, it's not a hard thing to get your head around and I haven't really changed. I've just become a lot more confident and a lot more focused. With the second album I've picked it up a gear [CLANG!], taken it to the next level [CLANG!] and have done a lot more uptempo songs. I don't think it's going to be a hard thing to adjust to my new style.

So is the new single a fair rep­res­ent­a­tion of where you are as An Artiste?
Yes. For my second album I'm very pleased with it.

Which songs on the album could only have been sung by you?
All of them. They were all written for me and everything has been written around my voice so I don't think anyone else could have sung them.

If songs being 'about you' is important, why don't you write your own?
I was involved in the creation of the album in terms of how I sang and performed it. I have been writing for future projects but not for this album. My songs might be on the next album.

Are you a good songwriter?
The greatest thing about me and my family is that we've always been great at writing rhymes and poems, which are basically little songs at the end of the day, so it's always been there.

What are the main dif­fer­ences between you and Justin Timberlake?
We both sing com­pletely dif­fer­ently and that's what's going to keep us apart from each other. I'm going to be dancing now so people are going to compare us even more than before but I've got youth on my side and he's been doing it for ten years. I'm new on the scene.

Is it true that you nearly murdered a dwarf when you made your video?
The dwarf just wanted a swim. It was a very hot day and I decided to cool him down by pushing him in the pool — that was all. He could swim, just not very well. I did have to pull him out though. He saw the funny side of it and he was laughing.

There is a distinct lack of dwarves in the video almost as if the whole story was made up to get you in the tabloids.
We decided not to use the dwarves in the end.

All in all, a day well spent for the dwarf.
He had a nice day.

Thank you very much Shayne Ward.

This is quite good