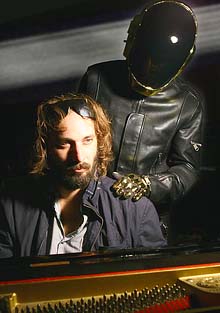 "I love nudity but not when it involves sportsmen"

Sébastien Tellier discusses working with robots and his sexual fantasies…

Sébastien Tellier is not a name often discussed around these parts, but the sex-obsessed Frenchman has teamed up with Parisian neighbour Guy-Manuel de Christo-Homem on new single 'Sexual Sportswear' and album 'Sexuality', so it all makes a bit more sense now.

Here is a chat.

How were you at sports in school?
Sport at school was not an activity I wished to take any part in. I didn't feel very com­fort­able in the changing room with other guys when everyone was stood around naked. I love nudity but not when it involves sportsmen.

Has your lack of sporting prowess ever come back to haunt you?
When I was very young I was in London with my friends on holiday and we were in an Italian res­taur­ant and decided to eat out without taking any money. We ate everything we could, so much food and ice-cream. We had to run from the res­taur­ant and my friends got away but the manager caught me by the back of my coat. My friends ran off and I was left alone in the res­taur­ant with the boss shouting at me in front of the diners. After a while my friends came back with some money and so it was all OK. It was maybe a mistake to do that…

Did that teach you a valuable lesson about not only physical fitness but the import­ance of honesty?
Oh no. When I was younger I used to do stuff like that all the time. I liked the danger and the excitement.

You have one of Daft Punk working on your album. Was he in costume during the sessions?
No, although in real life Guy does have the same style, he always dresses in very fash­ion­able clothes and designer labels.

Did he let you wear the helmet?
I saw the inside, but that's as close as I got. It's good now because I am on the inside of the Daft Punk mystery, I've seen inside a helmet and I know the truth!

Apart from a single with no singing, what else can we expect from your 'Sexuality' album?
'Sexual Sportswear' is the only instru­mental on there, everything else has lyrics and the whole album is very juicy and joyous. It's like a taste of fruit – very juicy and full of sugar. It is not at all like what I have released before and nothing like what Guy-Man did with Daft Punk. It's a very unique situation. It's very elec­tronic and like intel­lec­tual R&B, although not in the same way that Beyoncé or Justin Timberlake are R&B.

So you won't be giving Timbaland a run for his money?
No. 'Sexuality' is my dream of perfect sex, I wanted to make music that would sexually excite people in an Italian or Latin sense of sexual music; the big seducer with the broken heart, something finer than the sex machines of the US. When you listen to US R&B, if it is very exciting you can be excited with your girl­friend but usually it's too vulgar. I tried to keep vulgarity away from sex and my music.

Quite right too. Thank you very much, Sébastien Tellier.

'Those Brits nominations in full'…