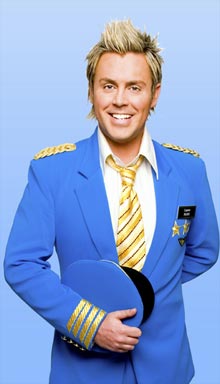 A chat about pop music with Russ from Scooch…

Hello Russ. Are you having a good day?
We met the Prime Minister this morning! We were both on GMTV. He wished us all the best for Eurovision. He's a big fan of the song, I made sure of it. He loves the costumes and everything. Anyway, before we go any further I need you to know that I am very upset with you.

Now Russ, we don't want this to end up as an argument.
I honestly thought that the one place that would support us this time would be Popjustice and you haven't. You've been horrible.

The problem is not with you but with 'Flying The Flag' and that it is shit.
I can see your point of view.

So you are agreeing that it is a rubbish song.
No! No, not at all. I'm being com­pletely honest with you. When the public come up to us in the street everyone is so sup­port­ive. What you've got to remember is that the public voted for us and when you criticise us for rep­res­ent­ing the UK in Europe, you have to remember that it was them who voted for us.

That is what the Nazis said.
You're comparing Scooch to Hitler? We're not like Hitler.

Yeah, but The Beatles were rubbish though.
If we sell as many albums as The Beatles then I'll be happy. I agree with what you've been saying about the music that it is of its time and so on, but there isn't enough music around now that is like that. A lot of people are saying it is refresh­ing to hear pop again. There isn't any pop out there at the moment.

But there is — it just doesn't sound like it's from seven years ago. Are you saying that 'Flying The Flag'-type pro­duc­tion is the defin­i­tion of pop and what it should always sound like?
Well, we're obviously from a back­ground of the Stock, Aitken and Waterman pro­duc­tion and sound. Our sound is what I'd consider to be pure pop.

As a fan of pop music, do you not consider it dangerous that people equate pop music with novelty music, which is essen­tially what 'Flying The Flag' is?
Every year Eurovision becomes more and more about the actual per­form­ance and how you get on with it. We recently recorded a song that is very com­par­able to 'More Than I Needed To Know' which we thought about sub­mit­ting and we talked it through but the BBC and everyone else involved thought that to just have a good song wasn't enough. Look at last year's winner, they were eight feet tall with rubber masks. We're not going to that extreme but we are having a bit more fun with the whole experience.

There's still the question of why a certain style of music now defines what 'pop' is supposed to be about, though…
I think because the 80s pop movement was so huge. Then in the mid 90s, there was B*Witched, Five, Point Break, Lolly – all of those bands were around at the time and it was a great era.

But acts only became big because their music connected…
I honestly think it is on the turn and that pop music is just around the corner because everything goes in a circle.

But, again, pop music is in the charts now. Is this pining for a certain style of pop music not just nostalgia?
Possibly. But there is a lot to be said for remin­is­cing. Just look at Take That, who were obviously at a com­pletely different level to us when they split, but they've come back now as big as they were back in the day.

How do you think pop music of the type you like could come back now, given that all the pro­mo­tional oppor­tun­it­ies have now disappeared?
Well, kids listen to different music these days because there is no altern­at­ive. If they're in the car on the way to school they listen to whatever their parents are listening to. So if they say they like the Kaiser Chiefs that is because that's what is being played on the radio. Thing is, from speaking to people who've got kids I know that their kids love things like High School Musical and Hannah Montana.

But that tends to be music made expli­citly for children, when in the PWL heyday a lot of the music they were releasing was as accepted by adults as by children.
As pop music goes, the quality of pop music used to be really high. There were great catchy tunes and you can't say that our song isn't catchy.

Infectious might be a more appro­pri­ate description.
(Sighs)We're not going to argue with anyone. Everyone is entitled to their own opinion.

Thank you very much, Russ from Scooch.

Rihanna singles — a lot like waiting for a bus…