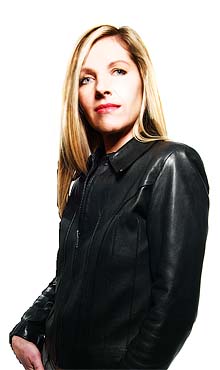 "I stuff all my money in my mattress".

Sarah Cracknell of Saint Etienne fame has sung over the music from the Lloyds Bank advert and, with a bit of help from a man called Mark Brown, is releasing it as a single, 'The Journey Continues', on February 4. Or maybe he made the song and then roped her in to do the warbling at a later stage. It's not clear.

Hello, Sarah Cracknell. Are you working with Richard X on a huge pop comeback?
Where did you hear that? It's meant to be a big secret – or so I'm told. Who knows if we are planning a pop comeback, heaven only knows.

What impresses you right now about modern pop music?
Things are def­in­itely on the up, there was a phase where everyone was so dis­in­ter­ested in what was going on in pop music but that has changed. There's a real thing about female singers with inter­est­ing voices going on and I really like Duffy. I like what she's got going on – maybe it's a blonde 60s kitsch thing…

Do you think you will ever record another big gay disco anthem along the lines of 'He's On The Phone' or 'Sylvie' again?
I am sure that will happen. We've got such a loyal fanbase in the gay community and they're always really fun when we do gigs. They're the ones who bother to get up, dance and have a good time.

Might there be some reswizz­ling of older tunes on the horizon?
I was thinking about this the other day, and there is a track that could benefit from a certain something but mainly because it never came out properly. It's a track called 'Burnt Out Car' which we recorded with Brian Higgins of Xenomania fame. It's just really good and should have been a single and given more of a chance in life.

What plans do you have for the rest of the year?
Saint Etienne have a best of album coming out…

ANOTHER ONE?
Another, yes, we're just picking up where we left off and then re-issuing and re-packaging — which is the really exciting part — our back catalogue with proper albums and a second CD of b‑sides and other bits and bobs – not to mention the unmen­tion­able collaboration.

Who do you bank with?
Use a bank? I'd rather die!

So what do you look for in a bank? Are you a saver or a borrower?
I don't use any bank. I stuff all my money in my mattress.

Let's hope there aren't any robbers reading. Thank you very much, Sarah Cracknell.

Disney require two and a half minutes of your time