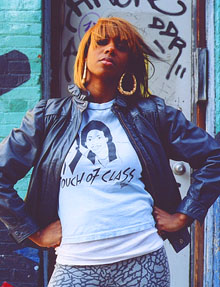 Santogold was responsible for the year's best pop video to feature a horse with her quite amazing 'LES Artistes'.

Also a guest on Mark Ronson's 'Version' album, we spoke to Miss Santi White about her upcoming album and her anti-histamines…

Hello Santogold. Are you enjoying the priv­ileges of being signed to a major label?
It's a machine. You get in and they are ready to go. It was easier for me because I didn't have to make the record, it was pretty much done and they already loved it. They asked me not to change anything on it — if anyone had tried to get in my way I'd have been like 'fuck it, I don't need your stupid record deal'.

Why isn't your good pal Mark Ronson on your album?
We planned to work together but it wasn't possible timing-wise. My whole record was written and recorded in eight weeks. When it was meant to come out on an inde­pend­ent label they were pushing me to deliver it imme­di­ately and we did. Mark wasn't around in those eight weeks and it just never happened. With all the label changes we had loads of oppor­tun­it­ies to go back and change stuff and I still never got a chance to get Mark involved.

There's a little community of Mark Ronson col­lab­or­at­ors and friends knocking around now, isn't there.
Kenna and I are friends and he's in my 'Creator' video which I have recently shot. He called me up and asked for my help on the Ashlee Simpson record, told me he was working with Chad Hugo from The Neptunes. I went in and Timbaland's producers were down­stairs and they heard what I was doing and asked me to go and work with them and it was great. I don't like song­writ­ing for other people but you can't turn down oppor­tun­it­ies to write with Chad or Timbaland. It's great exper­i­ence for me as a songwriter.

How did Ashlee Simpson get so many amazing people working on her new album?
Come on. It's just money. I go into the studio, everything you order comes on a silver platter — and I'm not kidding. They bring you chocolate chip cookies on a silver platter. A REAL silver platter. On the business side of things and from an exper­i­ence side of things, you're not going to turn down situ­ations like that. It's a formula, for all that type of music you hire the same producers and you get a certain level of quality because you pay for it. But it's a different thing entirely — it's not the same as artistic music. That's not the sort of pop music I talk about. It's a different world and it's for different people and for me the exper­i­ence of doing that is very important.

What did you learn from the exper­i­ence of Ashlee Simpson and her silver platters?
What I bring back to working on my stuff is the ability to write a chorus and for it to be 'boom – here comes the chorus'. When you're writing formula pop songs you have to be able to do that. So when you want to turn it into something that has meaning it's strong and you're working with all these things you want to pull together as one, you can just tap into something where you're guar­an­teed to know what is going to make a chorus pop. Once you can tap into all those elements, you're onto something special.

Did you enjoy inter­act­ing with a horse for your 'LES Artistes' video?
I was fine while I was filming the video because I took allergy medicine, so the medicine did work, but then the next day it aggrav­ated my cold and became a crazy chest cough. Then I couldn't sleep all night and I was up from 2.30 in the morning until 1am the following morning and was outside from six in the morning until 11 at night shooting my video with a t‑shirt on, sat on a horse. I wasn't in the best of ways.

Do you need to mount another horse at any point in the immediate future?
I don't but I do love horses. I am going to keep trying this allergy medicine and take up a little bit of riding.

What do we need to know about your amazing 'LES Artistes' single?
Well, it's 'L‑E-S Artistes' and it stands for Lower East Side. It's not a French thing, it is playing on the fact that everyone tries to make things fancy and it's really pre­ten­tious. The song is about me moving back to New York, feeling really vul­ner­able, wanting to be an artist soaking up all sim­u­la­tion cre­at­ively but at the same time staying intro­ver­ted and in my own mind. At the same time, it's about being accosted by the New York scene and the scenesters and hipsters, who are really not artists and are just pre­tend­ing to be. They're all about just being seen.

For people who haven't yet heard your album, should they expect songs like 'LES Artistes' or a racket like 'Creator'?
'LES Artistes' is not even the extreme of what I do. 'Creator' is extreme on one side, but 'Lights Out' is the other side — it is complete indie rock.

Oh dear…
All of the songs have a reggae or dub element. They've all got a folk quality too, very min­im­al­ist. The sound is very raw so that's the only real overall theme, but as an album it really covers a very wide spectrum. I think as far as song­writ­ing is concerned I know how to write catchy choruses and I know how to write melodies that are easy to follow. Within pop struc­tures I try to keep the music as inter­est­ing and as creative as possible. In the record you get all these different influ­ences mashed up together so you never know what is coming at you next.

Thank you very much, Santogold.