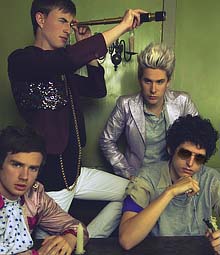 "THE SOUND OF SEVEN-YEAR-OLD GIRLS SCREAMING"

Palladium on hanging around schools and June Sarpong's childhood…

Palladium are a bit like McFly or The Feeling in that they make amazing pop music with guitars and drums yet manage to be nothing like the Pigeon Detectives.

Palladium will be spending the rest of 2007 touring with Mika, they release their new single 'High Five' next week, and they're a bit nervous about it.

How do we know this? Singer Peter Pepper told us…

Hello Peter. What is happening in the world of Palladium right now?
We're on a schools tour at the moment and we've just played a gig at a school in Liverpool.

You have our sympathy. Did bands ever come and play at your school?
I remember having bands in to play at our school, but none that ever came to anything.

So why did you decide it would be right for you to follow in the footsteps of those bands?
We thought doing a schools tour would be good because there are a lot of kids who never get to see live music until they're fifteen or sixteen, sometimes even older and these kids are just gobsmacked as soon as you start playing. The first time we did a gig at a school there was this weird noise as soon as we started playing and we were petrified that we'd broken the PA, but it was just the sound of seven-year-old girls screaming. They love it.

Good. When was the last time you had a normal weekend situation where you looked forward to having two days off like a person in regular employment?
When you're playing music, weekends don't really exist for you because that's when you're gigging and working on the weekends – but you're just as likely to be gigging in the week so to be honest the whole idea of a week has gone com­pletely out of the window.

Would you like a weekend?
You know what – I'm not really ready to settle into a routine just yet, so no, I like things to be change­able. It's nice when things come in at the last minute and throw your plans up in the air. It's kind of exciting that way, it keeps you on your toes.

How drunk did you get last weekend?
Very. We played at Guilty Pleasures at Koko last Saturday and it was one of those nights where you can't really enjoy it unless you're drunk. We got covered with glitter glue, it was thrust upon us by an air guitar band. They came up to us in the corridor and wiped it all over us and we thought, fair enough, let's go.

If you were offered a support slot with either The Feeling or McFly, which would you pick?
I'd probably pick The Feeling so we could try and persuade all their fans how much better than them we were. You wouldn't have a hope in hell of con­vin­cing McFly fans you were better than them — McFly fans are proper die-hard. There's no one coming between McFly and their fans.

A lot of famous people like your band. How many people have you met who don't like your band?
I don't think we have met anyone famous who hasn't liked us yet, but I think we should so we can get some tabloid stories going. Should we start some sort of tabloid battle now? Let's say something bad about someone. 'I hate The Feeling' perhaps. Although I really don't hate The Feeling. Perhaps we'll wait until someone says something bad about us instead…

How are you hoping to spend this coming weekend?
It's the weekend before our single comes out so I think I'll be a bag of nerves for the whole thing. I think it'll be best if I just spent it with some friends and a load of alcohol.

What's the best thing on telly on the weekends?
The Tim Lovejoy show 'Something For The Weekend'. It's so rubbish. They always have a cooking slot – and the food looks dis­gust­ing. They have a gadget slot and the gadgets are always com­pletely useless.

Have you ever met June Sarpong?
We haven't met June Sarpong but I think she's cool. She strikes me as the sort of girl who would have been a nightmare at a sleepover party because she'd be up all night talking with that voice of hers, going on about everything that came into her head. It's a great voice but I can imagine it going on all night and keeping everyone awake. She's cool now, but she probably didn't get invited to many sleepover parties when she was younger…

Thank you very much Peter Pepper.

What a load of old wank