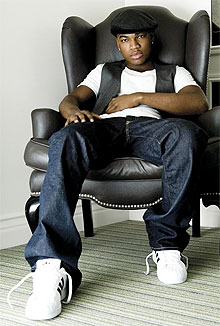 Ne-Yo. He's written some good songs. He's sung on some of them. He is an 'all round entertainer' (NB: he is not actually spherical).

Let's see what he had to say for himself when we phoned him for a chat a few weeks ago.

Where are you at the moment, Ne-Yo?
I’m lying in bed. It’s a very rare occasion for me to have a lie-in so I’m enjoying it while I can.

Are you wearing a hat at the moment?
No – there are a few places that I don’t wear a hat. Like in the shower – that would just be stupid. And I don’t wear them on airplanes.

Have you got any clothes on at all?
No.

Blimey. What was the last thing you had to drink?
A large bottle of water. I’ve been on this water kick lately as I’m trying to slim down a bit so I’m drinking loads of the stuff.

Doesn’t that just make you piss loads?
It makes me go a whole lot, but I seem to be shedding the pounds.

That's great news Ne-Yo. 'Closer' was quite a dancey song from you. Relatively. Did you lie awake at night wondering whether it would upset your fan base and send them all off crying in the streets about your new change of direction?
The song was inspired by music from the UK. It was more about waiting for the rest of the world – when I say the rest of the world I mean America – to catch up. The song caught on quickly in the UK which I expected, but change is dangerous in the States. It’s a double-edged sword: if you do one thing well, people want you to stay doing that one thing, but then you get cri­ti­cised for being boring. The song took a while to catch on in the States but thank­fully it did in the end.

Was that part of the reason you played it safe with 'Miss Independent' as the second single?
I don’t think it was a case of that. The song is about what I think the sexiest thing about a woman is: independence.

Very sexy.
Yes. It’s about paying homage to female inde­pend­ence. The song is to let them know that I see what they’re doing, and for women who aren’t moving in that direction to step up their game.

It's good that women know where they stand. Are there other songs like 'Closer' on the album, though?
The whole album was inspired by UK music, in that it is very diverse. It’s not an album for one specific kind of person, unless you count people that appre­ci­ate music. There’s urban, pop, dancehall and techno – there’s something on there for everybody.

What UK music has been the inspiration?
I like Leona Lewis (?!), she’s got an incred­ible voice.  I’ve been working with her on her new album. I’m a huge fan of Coldplay, and of course Amy Winehouse.

Is there any artist you wouldn’t work with?
Kevin Federline asked me to do some stuff with him.

Oh dear.
Exactly. That’s not my kind of thing.

Do you get annoyed when songs you have written for someone else do better than your own singles? Do you have a cry to yourself about what could have been?
No, not at all. As long as the song does well I’m happy.

You have been working on Michael Jackson’s new album. This is very exciting news, yes?
Well, we’re still in the place we were a few months ago – I’m sub­mit­ting songs. We haven’t got together properly in the studio yet.

Is it sounding any good?
I can’t go there.

Any song titles?
They made me promise.

Is he mental?
He wasn’t when I met him. He seemed like a guy who really appre­ci­ates and enjoys music.

What was the first thing he said to you?
He mentioned a song that he had been working on and he sang it to me. That was kinda cool.

Are you still annoyed with Britney Spears?
I had written six songs for her but her man­age­ment never returned my calls. So I gave a couple to Nicole Scherzinger, a couple to Beyonce and a couple to Rihanna instead. If she wants to work with me all it takes is a phone call.

Manners cost nothing. Where is your best friend at the moment?
Good question. I have no idea! My best friend is a person that is very special to me though.

But you don’t know where they are?
Nope! I really should give them a call and find out.

We suggest you do that right now Ne-Yo.
I will!

Thank you very much, Ne Yo.