Moyka, the Bergen-based self-described 'Norwegian pop witch', elec­tronic pop expert and one of the fifty best popstars operating in the world today, hopped on the phone for a chat recently. To be frank the first couple of minutes of the con­ver­sa­tion were actually quite bad to listen back to after­wards because I spent most of that time banging on about how abso­lutely brilliant her new EP is, which on reflec­tion was highly embar­rass­ing for both of us. The low point was probably when I said: "Maybe it’s because I’ve been in lockdown and I’m losing my mind but I’d almost go so far as to say it’s a masterpiece."

"I’m really happy with how everything turned out," was Moyka's response.

To be fair, though, we might actually be in mas­ter­piece territory here. The EP, Spaces, is very big on tunes; it's emotional and also banging. So very, very banging. That banging­ness is largely down to Moyka herself, given that as well as being a singer and a song­writer she produces her own work, alongside longterm col­lab­or­ator Eirik Hella. "I love working with others but it’s really important for me to be a part of the pro­duc­tion," she said on the phone. (She'd just been down the shops.) "Otherwise I don’t feel like the songs are mine. When it's just my voice there it's like I'm just a piece of the song; when I’m in the pro­duc­tion as well that’s when I feel: 'This song is mine.'"

The idea of being mystical came up more than once during the chat. There was talk of Moyka's desire to create what she describes as a 'mystic universe'. We agreed that some artists create mystic universes, while others don't: Moyka suggested Robyn, Lorde and Lykke Li as examples of people who get it right.

"I really like straight­for­ward pop music and I’m open to making that too," she said, "but I want to make something very special. Whether there's something hidden in the pro­duc­tion or some text you need to decode, I'd like people to listen to my music and want to figure out what it is." (Clue: what it is, is amazing.)

Moyka doesn't think she's ever really supposed to be a Katy Perry-level Big Pop artist. The realm of 'elec­tronic indie pop' feels the right sort of place for her. "It’s a cool category to be in as a pop artist," she reckons. "Also, those artists have the most inter­est­ing fans." Not that this category really means anything, these days, in terms of scale of success. We talked a bit about how Billie Eilish seems to have found a way flourish in the area between Big Pop and elec­tronic indie pop. "What she’s done in the music business is cool for people like me," Moyka noted. "Even though I’m older than her I look up to her when she talks about staying true to yourself, being strong and opin­ion­ated, and believing in what you’re doing."

Emotional healing through rhythmic movement was a topic that Moyka brought up a couple of times. "There’s something magical about dancing away the pain," she said near the end of our con­ver­sa­tion. "I've done that with so many pop songs I’ve loved. I felt very strongly after I made the [forth­com­ing] song Kanazawa — I went home and I cried and cried, and danced, and cried and danced. I felt: 'I got to say what I wanted to say.' It made me so happy."

Moyka's recently released the songs Backwards and Spaces, and the full EP is out soon. The songs on it are all about the end of a rela­tion­ship, something that seems like it took a heavy emotional toll on Moyka.

"I’m slow at letting go of people," she said. "It was painful to go through it and I just had to write about it, to try and let it go." We talked about how some artists talk about being Very Honest but mainly seem to skim the surface, and how that's possibly a good course of action in self-pre­ser­va­tion terms. "It can be scary to dive in," she admitted. "It took a little while to decide if I was going to address it in an honest way: to say it as it is. It hurts very much. It still deal with it; it comes in waves. I thought: 'Am I going to try and cover it up a little bit and make it more mystical?'"

"But I realised I had to say things as they were. You do have to endure it all over again while you’re writing about it, but I had to go through that to try and get over it. It was the right thing to do." 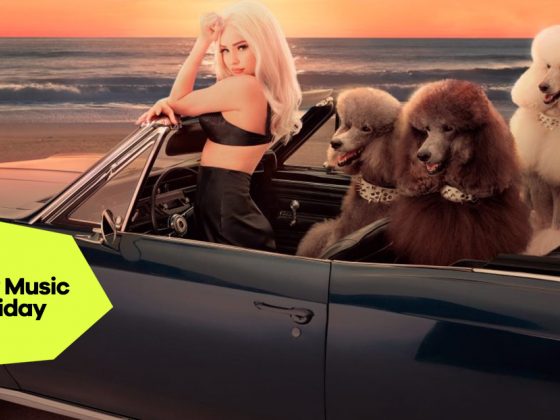 New Music Friday: Kim Petras has been on the coconut liqueur

Daði Freyr interview: "I can always say: ‘Sure, we would have won’"