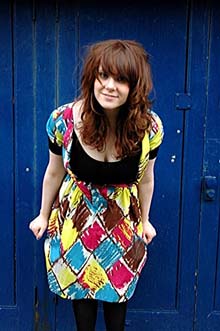 Kate Nash is respons­ible for one of the worst records of the year — the shocking 'Caroline Is A Victim'. Even she seemed embarassed by the whole affair.

However, her new single 'Foundations' is properly com­pletely and unques­tion­ably amazing and is about dreadful rela­tion­ships. (As if there are any other types of rela­tion­ship, right viewers?)

Because of this and because we couldn't think of anything we wanted to know about the lady herself we decided that as a 19-year-old she would be perfect to act as an agony aunt for you, the Popjustice reader. The problems you see below are real problems you sent in, but we've changed the names to protect the innocent.

Hello Kate Nash. We are going to ask you some personal questions sent in by our readers.
And what exactly is this for?

Brilliant. Shall we get on with it?
Yes, lets.

Dear Kate Nash,
My boyfriend has just moved in and after one week he is annoying the hell out of me and I want to split up. Plus, I am sure he is gay.
Hayley
Living with someone is a good test to whether you are actually meant to be with someone. If they are annoying the hell out of you and it's only been a week then I think it's a case of 'see you later' – it's not going to work. Also, if he's gay there's another reason to end things. I've had a similar situation myself, my ex is not gay at the moment but it is def­in­itely on the cards with him — he used to show affection by patting me on the back.

Dear Kate Nash,
My girl­friend wants me to put my thumb up her bum. I don't want to.
Should I give it a try or tell her I feel a bit uncomfortable?
Stan
A friend of mine who found out her husband was really into S&M but because she loved him she gave it a try. Most of my boy­friends don't com­mu­nic­ate very well so they never tell me what they want in bed…But you should just give it a try too. Everyone has their own 'things' and it's just fun, it might be weird but you should just try things out. If you're really not com­fort­able with things you should tell her.

Dear Kate Nash,
I came out of a very long term rela­tion­ship 18 months ago. He was a musician with a huge ego and I am well rid of him. I now have a new 'nice' boyfriend who is mad about me and is really kind and treats me like a princess, so why do I still fear I am in love with the wanker?
Nicky
It's human nature to want what you can't have and if someone treats you mean then it really does keep you keen. I have been there myself and it is just rubbish but I think she should stick with the nice one because we should all be treated nicely – although if she doesn't like him she shouldn't be with him. There's no point in being with someone who doesn't even treat you well.

Dear Kate Nash,
I have just had a haircut which I hate and then received an email from my boyfriend request­ing that I do not cut my hair – but it is already done. What the hell am I going to do?
Lauren
If I got a message telling me not to cut my hair I'd be at it straight away with the scissors! You can't be told what to do and besides, it's only hair and it'll grow back. If you get dumped because of a haircut you were dating someone too mater­i­al­istic anyway. Can I just say that I love being an agony aunt.

Dear Kate Nash,
My girl­friend (let's refer to her as 'bird') says I should be less like Gary Barlow and more like Gary Kemp. What is she going on about and should I care?
Ed
Who the hell is Gary Kemp? I don't know either of those men very well although I certainly don't think I'd ever go out with a Gary Barlow type of man…

Dear Kate Nash,
I have a big crush on my friend and his boyfriend. We've all kissed and 'more' together. How does one go about making a polyamor­ous rela­tion­ship happen?
Anon
Oh my God I've not had enough exper­i­ence to comment on that sort of thing. I can't offer any advice on that – it sounds fucked up but go for it I suppose, each to their own. Maybe she would be some sort of princess in the middle. Is it from a boy? Oh obviously…

Dear Kate Nash,
I’ve been involved in a serious rela­tion­ship for nearly two years now but I am no longer ‘in love’ with my partner. However, dumping them will literally destroy them – it will also mean that they become homeless as they live with me. Do I carry on trying or let it go and if so, what’s the best way to let them down gently?
Andy
You've got to let them down gently. This is one which really relates to my new single 'Foundations' which is released in the shops this week – you can't be with someone if you are not happy because you will end up depressed and you'll get old, your life will be over and you'll have spent it with someone you don't even like. He'd rather get dumped and have the oppor­tun­ity to slag you off.

Dear Kate Nash,
My boyfriend is being pursued by an inter­na­tional celebrity. How can I compete?
Zoe
That would be really intim­id­at­ing and worrying but the only way you can compete is by being really fun and make a real effort. If he really wants to go for someone because they are famous then you need to get out straight away. The celebrity here isn't worth any more than the person whose problem that is just because they are a celebrity. Celebrity means nothing.

Dear Kate Nash,
I'm 65 and a widow — where do I meet people that aren't about to die?
Elaine
Go to an exhib­i­tions and festivals. Festivals are amazing and I don't mean the shitty ones like O2 but ones like Latitude and book festivals. I don't know about internet dating.,the internet is just full of weirdos – and I don't think it's a very romantic start either, there's not much sexy about MSN messenger.

Thank you very much Kate Nash.

Another Kelly, another stinker

The usual ups and downs are happening in the midweeks