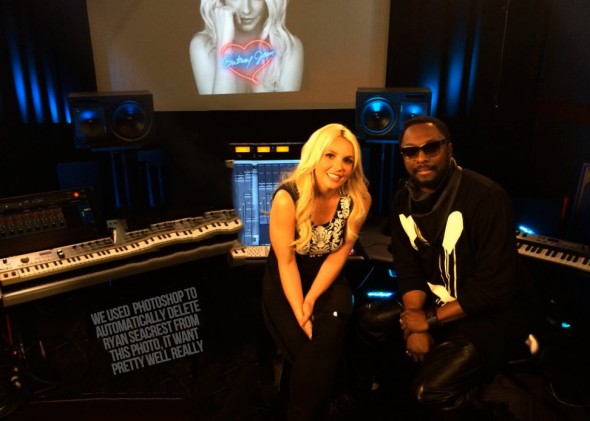 Last week we went to LA to attend Britney's 'Britney Jean' album playback thing. Clips of all the songs leaked while we were on the plane, and at the playback itself they only played a handful of songs and faded two of those down halfway through, so it was a bit of a strange affair but one amazing thing that did happen involved will.i.am.

As you well know, will.i.am is executive producer on 'Britney Jean', so we wanted to have a chat with him about his involve­ment. With popstars like Britney you sometimes find out more about an album from the people around them than you would do by asking the popstar to their face.

Example of will.i.am being a Generally Nice Guy: in the room where we did our interview — a recording studio — there was only one chair. But near the chair there was also a raised platform a bit like a stage which was about a foot off the ground. We said we’d perch on the edge of the stage so that will.i.am could sit on the chair because that seemed like the polite thing to do, but Will seemed to find that idea a bit silly and quite happily came and just sat next to us on the stage. Most big artists would have just taken the chair. It's hard to think of a single one who wouldn't, in fact. And that seems like a minor thing but it's minor things that add up and make all the dif­fer­ence, right?

Also we were only supposed to have a few minutes with him but he just kept chatting, then even after we'd finished talking about the Britney album he continued talking and — just as strange as the chair thing — started asking us questions about what we did, and about London, and things like that. (Popstars are usually not very inter­ested in the people around them, and rarely even pretend to be.)

So basically will.i.am is great and here's the chat we had about the album.

Right.
So executive producer means trying to keep it as organised as possible. It’s about who’s organ­ising it, who’s going out and finding things. And if she doesn’t want to… Well, I have to be the bad guy, to break the news to folks who don’t make the record.

It seems like some executive producers see their role as a chance to dominate, or put their own per­son­al­ity all over someone’s project. And if this is indeed supposed to be a personal album then that’s quite difficult.
Well yeah. So with an album you have the producer, or the producers. And you have the label, and the A&R. And the executive producer sits in the middle of all those chefs. Or chiefs. They bring organ­isa­tion to what can be chaotic.

And you feel that you’ve achieved a sense of clarity with this album?
Yeah. Clarity. And when it’s in my hands, there’s no leaks. As soon as you give it away, the leaks happen. If it was up to me, there would BE no leaks. I’m like, “I told you guys to leave it with me!”.

And leaks of unfin­ished songs must be even harder to deal with than leaks of a final mix.
Yeah. And we have a while to go before it comes out. So… That’s always the hard part.

Can you become friends with someone when you’re playing this sort of role, or do you have to keep your emotions separate?
Yeah, it’s all friendly. It’s just about structure. It’s like: one hard drive. In the studio. “No, you’re not coming in with your hard drive, we have to record on one hard drive only.” It’s that kind of stuff. Talking to studio managers saying “you can’t charge me an arm and a leg, I work with the Peas there, you can’t give me no bunk ass deal, we want to keep our costs low so she makes money”. That’s the sort of thing an executive producer does — nego­ti­at­ing deals. It’s executive work. Not creative. That’s why it’s called EXECUTIVE producer. A lot of the time people think it means you’re in there making creative decisions. No. You’re making the artist more com­fort­able when there’s a whole bunch of other chefs — and chiefs — in the room. You’re con­trolling egos. “Nuh-uh homey, you can’t come in here with all that bullshit, you’ve had TWO HITS.” “Actually you have no hits, but that’s a nice beat.” “That topline’s amazing, how about we put that topline and put it on that.” “You don’t like that? Okay cool, I’ll shut up, just tell me what you want me to do.” It’s sug­gest­ing things.

What did you find out about Britney Spears while you were making this album?
How focused she is when she’s working. How dedicated and dis­cip­lined she is.

Did that surprise you?
Well, most artists aren’t like that. I don’t want to name artists but Britney is the most focused and dis­cip­lined of all the artists in the industry.

Why do you think that is?
(Laughs) Because she’s a pro!

But aren’t there loads of pros in the industry?
No. Those aren’t pros. Britney’s a pro. Her time is valuable: she has kids. And a lot of the time with an artist they’ll go into the studio, they’ll sit around, they’re watching TV, they order some food, they’re giggling and joking, they’re searching and listening to other people’s songs, they finally get to work then they take a break, they order some food, their friends come… And that happens for four or five months, sometimes eight months. Britney’s like: “I’m coming in from 2pm until 6pm.” She’ll arrive at 1.30, and from 2 to 6 she’ll be like BAM BAM BAM BAM BAM BAM. BAM BAM BAM BAM. BAM BAM. I’ve never seen anything like that. Her work ethic is pretty admirable.

Is having this involve­ment with a Britney album the dream job for someone like you? Would most people jump at this chance or would some people back away?
Executive producer is a hard role. If it’s a success, the executive producer does not get the credit. If it’s a failure, “IT’S THE EXECUTIVE PRODUCER’S FAULT!”. You’re either the last to be acknow­ledged or the first to be acknow­ledged. And I know that, because I’ve been on the other side, as an artist! But I like Britney. I just love her ded­ic­a­tion and love for music. That’s just the way it is. I love how sweet she is, and how genuine she is. Shy, but fierce. And I want to see her win.

Paloma Faith's working with Stargate, Pharrell and Plan B on her new album