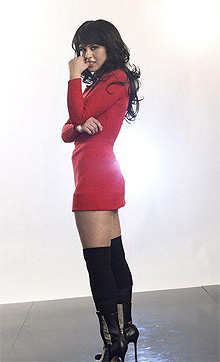 "NO MORE NUDITY — UNLESS IT IS A HOT GUY"

Stefy Rae discusses her plans for ruling the world…

After the very first Popjustice Live event, we went to interview Stefy with a bit of a hangover about how she would run things if she ruled the world.

Here is what she had to say for herself…

There should be no more nudity!
"I think there is too much nudity in the world! There are kids that are 11-years-old who already know about sex and everything! The youth are losing their innocence way too early and you see little girls trying to look like women and it's sad. It's scary. So no more nudity, unless it's a guy and unless he's really hot."

There should be less buffets!
"If every meal was a buffet, we'd all be fat. If you're dis­ap­poin­ted with my answer then I'll say sure, I'd like every meal to be a buffet. Just for you."

Off-the-rails popstars should be put back in the studio by force!
"If they are really good at music then yes we should be able to force people go back in the studio. If it was U2 doing that then of course, get them back in the studio, make another great record. Now, if it was just a crappy musician then they can go ahead and do what they want, I don't care!"

Everyone should get the day off work if they acci­dent­ally wake up with a hangover!
"Being nauseous on the job is not very cool, although I've never had a hangover. I don't drink. I have a glass of wine every now and then and then sometimes I crave beer but I never ever get to the point where I'm wasted. I try to be a good girl."

All bad photos should be illegal!
"I've seen a couple of me and I've had no clue what the hell I was doing. You need a lot of photoshop to get a good photo out of me. Live shots are the worst, I don't know if I do all these ugly faces on purpose, but people are always showing me these photos and saying 'oh this is from your show the other night' and I don't know what the hell I was doing, I can't believe people said that I was good!"

Lamb should be banned!
"I hate lamb. It's tastes funky. Dude, you asked me! If you like lamb we could have the perfect meal together, you could just eat all the stuff I didn't like…"