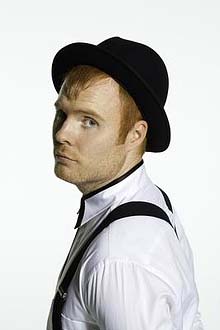 "Yanked around by a face mask and thrown around."

Andy Butler is the man respons­ible for getting Antony 'and the Johnsons' Hegarty down the disco although, by all accounts, it wasn't too tough a job.

Hello, Andy. Your inter­views are over-running – whose fault is that?
Mine. I'm sorry, I'm a real chatty Kathy today.

That will no doubt help the interview process. Have you been working hard to promote your new record?
I've been pretty busy. I had a bunch of radio stuff to do yesterday, it was my first exper­i­ence of talking on the radio. It was okay, but I'm not sure my voice is radio-ready. It was kinda fun; I was really nervous at first but then I got really excited about it. I liked doing things like, "you're listening to such and such on radio whatever…".

Do you ever worry you'll get too com­fort­able on the radio and let loose with a load of foul language?
At one of them, they asked me to be a little witty, but when I get funny I start saying bad words. It's also impossible to be hilarious on demand – my response to people wanting me to be funny is always just "fuck, shit et-cetera…". Then they ask me why I'm just cussing and I don't under­stand what there's not to find funny about it.

So you're in town on business. Have you been making the most of London's club scene?
I did get to go to Horsemeat Disco on Sunday night. I was hanging out with a handful of producers who I've been buying music by since I was 17 or 18 and now they're con­grat­u­lat­ing me and telling me how excited they are about my record, so now I'm one of the gang. Also there is always someone taking their job seriously on the decks in London and that def­in­itely doesn't happen on the gay scene in New York. I feel like it doesn't happen often, period, in New York, whether you're in a gay or a straight club. So I think British audiences and British DJs have a real appre­ci­ation for music.

Well done, us. Can you dance?
I can dance a little. I studied dance for three years in college, but I didn't under­stand my body in terms of movement at all until I got into dance class. I played American football in school and I was pushing these huge pieces of metal around football fields, being worked to death, yanked around by a face mask and thrown around. I developed a very strange sense of my body. I went to dance classes and when the teachers asked me to do something very simple like lifting my shoulder, I'd lift my knee. I was a big clumsy boy. The teachers loved it though, dance teachers always favour the boys and I had a good sense of rhythm. The running man is still a hard one for me though.

Professional dancers are often com­pletely out of place when it comes to dancing in nightclubs, though…
They look like complete fools. It's true.

Are you happy with the era you grew up in or would you like to have spent some time in different one?
I think I would maybe like to take a two-week visit to the 70s. It was probably blissful and fun where people were carefree, but knowing what came after the days of disco it is hard thinking I would have liked to have been there. I think I grew up in an easier time in terms of coming out. I think if you sub­trac­ted ten years of exper­i­ence from my parents and they hadn't seen three or four main­stream John Waters movies then maybe it would have been a bit more difficult.

How easy was it to persuade Antony to get involved in a dance project?
It took nothing, Antony and I bonded so much over shared musical interests. A lot of our time spent together was putting on a record, putting on another record and then putting on another record. A lot of the stuff he expressed really deep love for was early synth pop. I remember when I first started bringing over disco CDs I had made, he kept saying that Boney M were cool and he wanted me to bring Boney M over to his house. I had to acknow­ledge that he has great taste. He loves Abba and he's also a huge Gloria Gaynor fan. There were moments early in his career when Antony would sing covers of 'I Will Survive' but in that really slow, dirgy way he does things.

Are there plans to launch Nomi and Kim Ann as solo artists?
I'm really excited about the notion of that and I def­in­itely want them to work with other producers. Nomi is already a fully-fledged solo artist and Kim Ann and I are in cahoots. We tackle things together but they probably both will sing with other people and poten­tially have really thriving solo careers.

Do you think there are things we can learn from ancient Greek mythology?
Definitely. I'm always just moved by the tragic elements and heroic tales that exist. There is always this intense sad moment that happens to these spec­tac­u­larly heroic indi­vidu­als. There are def­in­itely life lessons to be found; a lot of accepting life on life's terms can be taken from Greek myths.

Do you think that the Olympic Games would be more inter­est­ing if athletes were still naked and covered in oil?
I think there might be more viewers! I would maybe get dis­trac­ted at moments though. I say we should try it one year, just give it a go and see what the results are. They may have trouble showing it in the daytime though…

Would you like to be invited to more?
I'm happy doing the one-on-one thing right now, so no.