'THE' GOSSIP HAVE A BRIAN HIGGINS-PRODUCED NEW ALBUM OUT THIS WEEK SO TO CELEBRATE ALL THAT WE DECIDED TO HAVE A BIT OF A CHAT WITH THE BAND ON SPEAKERPHONE WHILE THEY WERE SITTING IN A HOTEL AND WE WERE SOMEWHERE ELSE. IT'S A BIT OF A SHAMBLES, SO 'APOLS' FOR THAT. 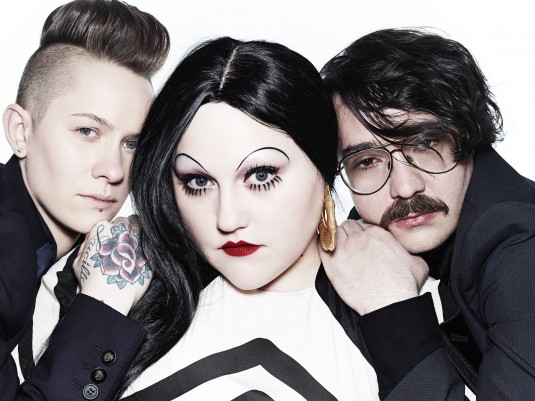 How are you?
Beth: I'm good thanks.

Is it just you Beth?
Hannah: I'm here too.

Hello Hannah. How did you come to be working with Brian Higgins on the album?
Beth: Do you know Richard Mortimer from (swank fashion 'journal') Ponystep? He's a good mutual friend of ours and he said to Brian 'I know this girl called Beth and maybe you guys should work together and you'd probably like each other' so we did and then we just messed around and played a couple of songs and it happened really fast. All of sudden we found ourselves in the position where we needed a producer and Brian came up and we were in London and it just worked really well.

Brian's notorious for working in unusual ways in the studio. Was it quite a different exper­i­ence to recording your other albums?
Beth: It was different because we were in London. It was strange to be in a different country. But generally it was the same.

Did you go to Xenomania Towers in the country to record?
Beth: Yeah. We'd just come in from Portland where we'd been working on the drums. It was really beautiful there.

Amazing.
Beth: There was a Pizza Express nearby. It wasn't too rural, but it was really beautiful. People would be like [puts on pretty good English accent] 'have you seen the garden?' And I'd be like 'oh you mean the estate grounds?' The way they play it down is really cute, like, 'oh his little country home'.

Were there any popstars hanging about?
Beth: Florrie was there, Annie was there. That's when Nathan and I were there anyway. And there were some other people that I don't remember. I think they were up and coming people. But they were like 'oh in a week Christina Aguilera's coming in' and I was like 'please let me stay here'.

BLIMEY.
Beth: I would have loved to have stayed there. I bet I could have made her laugh.

Imagine if you two had recorded a song together. That would have been quite something 'vocal-wise'.
Beth: Like, 'Don't Go Breaking My Heart'. (Starts singing) We could have both done some over the top vocals. [Does just that for a bit].

The melody would have been the first thing to go.
Beth: Yeah, like, see you later.

[At this point Nathan from the band wanders into the room.]

Hello Nathan.
Nathan: Hello, how are you?

We were about to discuss why Hannah didn't get to go to the coun­tryside with you and Beth?
Hannah: I'd finished my drums in Portland, so I didn't have to go.

Your work was done.
Hannah: Me and Nathan did the tracking and stuff but Beth likes to be alone when she does her vocals.
Beth: I like to be very alone. I wouldn't even let my mother in the studio.
Hannah: So I just leave her alone. I finished all the drums in Portland so it was really nice.

The last time we spoke to you when your EP came out Beth you were banging on about being shy in the recording studio.
Beth: I had to get drunk!

How drunk were you on this album?
Beth: I wasn't drunk at all. That was the first time I've had to drink to be in a studio ever, for that Simian… Thing… Whatever. It was just a tiny room and then me and they were like 'Go!'. I was like 'okay, why don't you just stare me in the eye and I'm going to take off all my clothes and you can judge me. Stare into my chocolate star'. (Chats in back­ground with Nathan about chocolate stars for a bit)

One of the things we need to clear up is why you hate Mark Ronson so much?
Hannah: OH MY GOD!
Beth: That is the most hilarious British thing I've ever heard.

We're joking of course, but what did actually happen?
Beth: For me, in ret­ro­spect, there was a lot of shit going on and then in the middle of the record my dad died so I could't write any of the lyrics and he only had a certain amount of time. He was working on other projects and he was getting married and I was in no fit shape to finish a record in a really small time slot. For most of the time I was lying in my weird busi­ness­man apartment on a cot looking at the Gherkin. I didn't realise I was depressed until a month ago and this was like last July and I was just lying in a cot looking up at the Gherkin and if it rained I would just look up and go 'oh life is a mystery'. At the same time I'd get an email from Mark saying, 'we need lyrics to three songs ASAP'. I have a song about it called 'Cot In The Rain'.

[There's a lot of talk about this for a while but it's hard to make out because they're all talking at the same time, apols.]

The album's called 'A Joyful Noise' but you've just said how sad you were when you were making it so why did you go with that title?
Beth: It was a sad time but not until later. I always do that, like, 'woah, I was really depressed when I was cutting myself and eating liquorice for a week'. (Laughs) One day I was getting off the plane and I was like 'my dad is dead, that's hilarious'. It's such a movie, the way that depres­sion pans out. It's laughable.

Also, Beth, you turned 30. How did that influence things?
Beth: It was awesome. I really think that turning 30 is this eye opening thing. I'm really enjoying being older because there's this level of con­fid­ence that you didn't even know existed when you were 25. Being able to look at music in a different way. Being aware of all of the things I've learned and all the things I haven't learned, I swear that came with age. Plus, my skin looks real good.

Is it true you only listened to ABBA during your great depression?
Beth: (Laughs) The gay depres­sion? I listened to ABBA. I listened to a lot of Paul Simon. I was really inter­ested in pro­duc­tion and song­writ­ing. It was about listening to songs I'd heard a million times with com­pletely new ears and coming up with questions like 'how did they do that?' Right now I have loads of questions for David Bowie. I need to know the secrets! I don't want to meet Paul Simon though because appar­ently he's not very nice. I'll admire him from afar.

Can we just get everyone's favourite ABBA song?
Hannah: Oh God…
Nathan: I can't remember the name.
Beth: Yours is…

[This all descends into a lot of talking over the top of each other. At one point Nathan starts doing the bassline from his favourite ABBA song]

[More singing and talking over each other.]

Beth: We like 'Lay All Your Love On Me' or whatever it is and 'The Winner Takes It All'.

That's my favourite one too.
All: Yeah!
Beth: Do you know that line "the gods may throw a dice, their minds as cold as ice, and someone way down here, loses someone dear"? That's so beautiful.

And they're all singing it to their ex-partners aren't they, which is weird.
Hannah: Just like Fleetwood Mac!

Indeed. When are you all going to start a rela­tion­ship with each other and then split up and release an album?
Hannah: We would have a very good sex life together.
Beth: They [Hannah and Nathan] may have had sex together and they don't even know it.

One of the new songs is called 'Get A Job'. Which of the Kardashians is that about?
Hannah: Every single one.
Nathan: All of them.
Beth: I like the fat one! Khloe. I honestly think that she should really start pushing the chubby envelope. I like her because she's a bitch. She's got middle sister syndrome.

Is the song about those kind of people?
Beth: Yeah, it actually it is. And it's about gold diggers and coke heads that can't pay their rent but have enough money to buy coke.

Do you have anything else to add?
Beth: We don't hate Mark Ronson.

But they are awful people?
Beth: No. No. Overrated.

Awful overrated people?
Beth: Oh, you are going to hell.

'A Joyful Noise' is out now. 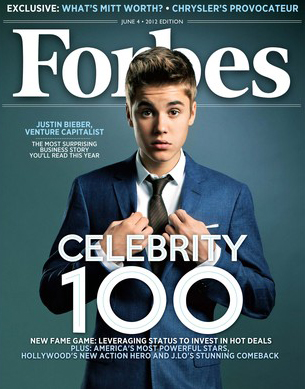 Jennifer Lopez and Justin Bieber are pop's most powerful

Nicki Minaj feat Chris Brown — Right By My Side