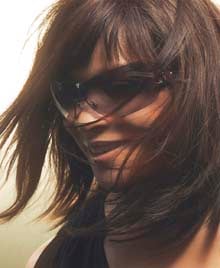 Gabrielle is probably the nicest woman in pop. This is just as well because otherwise she would probably have gone fucking mental when her single 'Why' didn't make the Top Forty recently.

Fortunately in this instance the whole 'she's more of an albums artist' thing is the truth because her new album is all sorts of amazing.

Hello Gabrielle, is it nice to be back or would you rather be at home watching TV?
It's nice to be doing all this and to be out of the house. My mum is glad I'm doing more than just tidying up. It's nice to be talking about this record that I've spent so long creating and it's fun — it's not all about seriousness.

Isn't it a bit early in the interview to be rolling out the clichés? 'It's just a bit of fun' et cetera…
I think the reason I get away with saying it's all just fun is that I'm not doing this every 18 months. I'll spend three years making an album, two minutes promoting it and then have another three years ahead of me to enjoy my life again.

Why do we never see you falling out of nightclubs with your boobs hanging out?
I do all that at home. If you saw me coming out of the shower you'd know why I don't do stuff like that.

Would you agree that by and large you make a dreadful celebrity?
I'm really sorry! I have always thought of myself as the Steve Davis of pop but even he is more hip than me these days.

Have you learned from the relative flop of your last album?
They say you're only ever as good as your last album and although I loved that album everyone else thought it was shit so what can I say? I don't know what went wrong with 'Play To Win', maybe just I needed that to make me pull my socks up. I have realised that I can't really write any more country songs because no one is inter­ested. I went off on one and I don't think anyone wanted to follow me.

When it all went to shit, why didn't you jack it all in for a bit of reality TV?
If I'm not singing I certainly don't want to be doing reality TV. Don't get me wrong, I watch all that stuff and I love it but I wouldn't for a minute. Even if I was broke, busted and disgusted I wouldn't do it.

Would you encourage your son to audition for X Factor, should he feel so inclined?
I've known people who have gone through X Factor — Maria Lawson was one of my backing singers and she is one of the most gorgeous women you could ever hope to meet as well as being mega talented. Why I wouldn't want my son to go through X Factor is because if anyone was going to make it, it was going to be her and for that not to happen really says something. It wasn't her first attempt either, if you really have the talent, like Maria, then X Factor is beneath you. It's a great show but it's not the best launching pad for up and coming artists. It's not about the devel­op­ment of artists beyond one season of the show.

Does the world of popular music seem like a different place after so long sat at home?
It's all so different now, we've got downloads before release dates – what is that all about? Then there's all this MySpace stuff — are artists really on MySpace? I can't imagine going on there, not that I'd know how. It sounds so complicated.

How come you never turned to drugs and drink?
I never turned to drugs and drink because I'm a fat bird and I love food. I just find myself eating, I don't need drugs to sedate me honey, those chocolate bars don't talk back, you can taste as many flavours as you like and never get called a slapper. They were my drugs. I do like the occa­sional drink but it's never got the better of me. I drink peach schnapps and pineapple juice by the way…

Good. Why on earth did you write a song as unbe­liev­ably heart­break­ing as 'Closure'? Could you not have finished the album with another 'When A Woman?'
One of my product managers (spooky record label bigwigs in charge of bits and bobs — Industry Ed) has just gone through a break up and he just couldn't listen to it because it's about rela­tion­ships and that point when you know you just have to draw the line under­neath them. Some of us find it easy and some of us find it hard, espe­cially if the line has been drawn under us before we've even had the chance to make that decision — it's quite heart­break­ing. I like to think that because I write from the heart and because I've been through it I'm not afraid to put myself on the line and if I haven't been through it then I've nicked it from a mate who's been crying on my shoulder and I've turned it into a song. It's about real people.

So when someone is crying on one shoulder, the other arm is busy scrib­bling down lyrics?
I'm not as insens­it­ive as that but to honest, the truth isn't so far off. Things like that happen and I think 'oh that would make a good story for a song'. My friends all know I'll do it although I did have a friend who thought 'Out Of Reach' was about them, the cheeky git! It most certainly was not.

Thank you very much Gabrielle.

Jens Lekman — 'And I Remember Every Kiss'

She sees you, and she just wants to dance with you…