"YOU KNOW WHAT YOU'RE GOING TO GET WITH A CHICKEN COTTAGE" 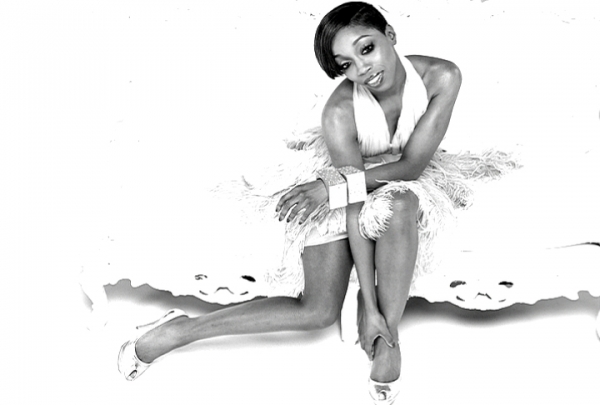 Estelle on what she misses about the UK, and her second bite at the pop cherry…

Having uprooted from West London for a life in New York, Estelle has roped in the likes of will.i.am, John Legend and Kanye West to work on her new album – which would explain some of the 'buzz'.

We spoke to Estelle about these events, among others, before she went shopping…

Hello, Estelle. So you're back. Why is now the right time for you to come back?
Because there's no one else out there like me now, I'm not singing "baby baby baby" and flapping my skirt around, it's about real talk. People don't want to hear "sweet­heart, darling" – they want to hear "fuck, he's hurt me". I'm not going to sugarcoat anything.

You're looking a lot more glamorous this time around.
Yeah look at that; I got legs and boobs. When I was doing stuff for '1980' I had to dress the part, but every time I went out everyone was asking why I wasn't in trainers and looking like a fly-girl. I got so sick of it.

You have also suc­cess­fully tricked people to tip you as a 'hot young thing' for 2008. But you're not new at all…
It makes me laugh because I'm not young either [she's 27] but I do love it. I'm happy that people are excited again about my music and excited to hear from me again. I went to my label with this project and they were relieved to have someone who had an idea about what they wanted. They liked not needing to make me into anything.

Now that you live in New York, what do you miss most about London?
Top Shop! I think about it all day.

Are you thinking about Top Shop right now?
No, I'm just checking my emails as I speak to you.

How rude! Are you on Facebook?
Yeah, don't you love it? I think Facebook makes a good break from MySpace; I get a million people getting in touch on MySpace every day. But every day I just deny everyone who's putting an advert up for their new CD or asking me to listen to their demo. Denied, denied, denied… But now I'm thinking about Top Shop. Everything is so expensive in New York.

Can't you just buy your outfits from Wal-Mart?
No! A few weeks ago I found my first Wal-Mart and it was just full of cheap TVs. Those places are just big for nothing. This store was in the middle of nowhere; we were driving through the desert and there was this huge shop in the middle of it. I looked around the store and it went on and on and on. It just kept going – I couldn’t see the back of the store. It was just massive.

You have also found some new friends in America. Shall we talk about Kanye West and John Legend now?
Yes! I met Kanye West outside a chicken and waffle res­taur­ant in LA. You don't generally find famous people hanging around outside KFC in London, but this was a famous black soul food res­taur­ant. It's not glitzy, it's pretty bog-standard but everyone goes there regard­less and gets their picture on the wall. It's like a cross between Nando's and Chicken Cottage – but one of the sit-down ones.

You can't go wrong with a Chicken Cottage.
You know what you're going to get with a Chicken Cottage, that's for sure. When I was outside the res­taur­ant in LA I knew Kanye was inside and I thought "please let Kanye West walk out now" and when he did I thought, "woo, Jesus is alive". Unfortunately, the only thing I had to ask him was where John Legend was, but he ended up inviting me to meet him and John at his studio to work on my album.

And what would be the album's 'killer track'?
There are two standout tracks on the album — one is 'Substitute Lover', and it embodies what the whole album is about and the second is 'American Boy' which features Kanye himself. That one is so different to everything and it's so catchy everyone is going to love it.

Why should people stop buying X Factor singles and buy yours instead?
Because I'm giving it to you real and I'm not sure they are. Leona Lewis has had prime time exposure and not just to the kids but to parents over 35 and they're the people who buy records. But their memories aren't that good; she'll sell a certain amount and be fine, but I don’t want to sell in the short term, I want people listening to my music for the rest of their lives. As well as buying the single now, obviously…

Obviously. Thank you very much, Estelle.

Something kinda (son of) Zeus