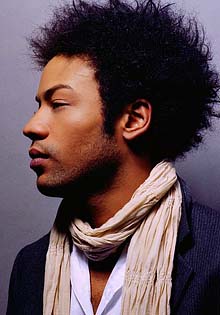 "All this stuff about fat people being fat because of society is rubbish."

Some people consider David Jordan to be the next big hope for British soul. All we know is that his single 'Place In My Heart' is amazing and his debut album is pretty decent too.

We spoke to David Jordan recently and put to him a selection of questions based around the song titles on his album. Some worked, others sort of didn't. See for yourself…

Hello David Jordan. If you are 'On The Money', what was the last thing you bought in a shop?
I bought some shampoo. I tend to buy from Toni & Guy because I've had so many disasters with my hair in the past. One day I kept chemicals on my hair so long that it started burning into my scalp and it burnt my hair off. Even to this day my hair doesn't grow in certain parts of my head.

In there anyone who has a 'Place In Your Heart' at the moment?
Only my cat, and she's called Cat. I'm happy with that name but she won't leave me alone. She's cute and sweet but she's just another reason why I'm never on time for anything because she commands so much of my attention. She follows me every­where around the house – I mean every­where. I go to the toilet, she follows me. I have a bath, she sits at the end of the bath tub…

How do you feel about the fact that the 'Sun Goes Down' about five o'clock now?
It's a bit annoying isn't it. I prefer the summer when the sun stays out although I like the winter when it rains sometimes — it can be very soothing and very melancholy.

How do you 'Set The Mood' when you are hoping to seduce someone?
I've never been seduced and I have never seduced anyone. However I do have a girl­friend who has an 'eye-look', a 'thing' she does. It looks like she's got a twitch in her eye, and I've told her this, but we went out in Germany and she told me she was about to use her 'eye' on this guy and it worked, the guy was really into her. I can't believe guys fall for girls with a twitch.

Can we just throw your track 'Love Song' on the enormous EU stockpile of generic love songs? Why do people only ever write songs about love?
The word 'love' can be under­stood in countless countries across the world. As a society we very much revolve around a par­tic­u­lar type of love, the love we have for a 'sig­ni­fic­ant other' and that is the sort of love we relate to. Every time you hear a song that hints towards some kind of love we auto­mat­ic­ally think of our boo. That's not the case where my album is concerned. I wrote these songs from all sides, different angles. None of them are about my cat though, that's one angle I didn't approach but will do soon.

What do we all need to 'Move On' from and get over?
People need to stop being so greedy. It's like fat people, they're greedy, all this stuff about fat people being fat because of society is rubbish, we can't blame everything on society. I'm good now, you can put a chocolate cake in front of me and I won't eat it and I never used to be able to do that.

Which of Princes William and Harry are you referring to in 'Sweet Prince'?
Neither! I prefer Princess Diana, although I really don't have a favourite royal. I don't read news­pa­pers or watch the news, I spend all my free time watching Futurama and The Simpsons instead.

Is being 'In Love' just an overrated chemical reaction that always ends in dis­ap­point­ment and misery?
Well, it can be. We're all looking for that special someone and it's always made out to be a beautiful fairytale thing and making out for the first time is always supposed to incred­ible – but you get there and think, what the hell was all that about? It's like getting married, women want to because they get to be a princess but men aren't into that sort of thing.

When was the last time you had anything other than a 'Glorious Day'?
I had a really bad period of my life a few years back. All of my friends were getting recog­ni­tion for their music and I wasn't, I wasn't getting any love from them either. That was the worst period I can remember, they were all working in music in one way or another and I wasn't.

What would be the first thing you'd do if you woke up and you were the 'Only Living Soul' left on the planet?
Oh my God what would you do? I'd be so scared! I'd probably just go to the shopping malls and pig out on all the crap I could for the next couple of days and once all the food had gone off I'd just die no doubt. I'd have to find other life to keep the species going or just perish. I'm gonna fight and if I survived the holocaust then there was sure to be a reason why. You could have a really good time in a shopping mall though, finding what you want to wear, I'd be the last man on earth but I'd make sure I was the best dressed man on the planet.

If we're going to 'Fight The World', what exactly are we going to fight against?
Terrorism. And George Bush, he's the worst terrorist of all. Terrorism and war, we live in a beautiful world and it's truly amazing. The people in the world are the reality though and we are our own downfall.

What a bleak way to end things. Thank you non­ethe­less, David Jordan.

*
David Jordan On The Internet: