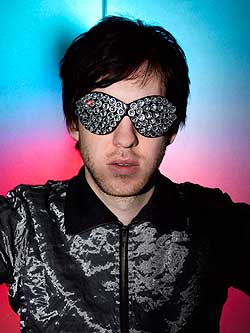 Ahoy Calvin. Where are you?
I’m in Willesden.

That’s nice.
It’s not at all. It’s awful. I moved my studio here and it’s a disaster to be honest with you. I’m in a fucking broom cupboard, I feel like Andy fucking Crane. It’s this room they rent out on a longterm basis and I’m the unlucky tenant.

How long do you have it for?
I can leave if I give two weeks’ notice which is great and I think I might do that sooner rather than later.

The idea of having this studio is pre­sum­ably that you are away from dis­trac­tion and working on new tunes?
That’s the idea but at the moment I’m working on making the live show sound good, which is a lot of work. And at the same time I’m trying to finish my album. And people keep asking me for backing tracks. I really want to give them things, but I’m not getting enough sleep.

The priority must be Calvin Harris: The Popstar.
Er, yes. I reckon. As long as I’ve got a record deal I’ll put records out and have that as a priority, rather than giving Flo-Rida a backing track. Which is what I’m trying to do now.

Does Flo-Rida really want a Calvin Harris backing track?
He does! Yes.

When you submit a song for someone American do you try to make your music sound more American, or do you try to make it sound more British?
It’s a boring answer but I just try to split the dif­fer­ence and make it not  sound like anything. And sometimes that works. But to be honest with you I’ve been sending lots of tracks to Americans and not getting great responses so I def­in­itely don’t have the answer to your question. I think all you can do is do something that you like. And as long as you like it…

…if anyone else likes it that’s a bonus!
I was NEVER going to say that!

You were heading there Calvin.
I was going to do an about turn and shock you with a piece of inform­a­tion so valuable that you would probably have had to simply put the phone down.

But then we ruined it all by talking over you. Interviewing fail.
Yes.

The question was more inter­est­ing than your answer, though. It was a good question that you let down.
Okay, sorry.

‘I’m Not Alone’ has been very well received. Are you going to fuck it all up with a follow up?
Yeah well the thing about the next one is that it sounds different to this current one. That’ll fuck me up a bit. And it also sounds different to anything else I’ve ever done.

Does it sound like Vampire Weekend?
No, no, no. It’s still dancey. It’s got a wailing diva on it. Mary Pearce. She’s not famous.

Was it ever going to be a famous person?
No, I wanted someone I could bung £250 to and never hear from again. Royalties are few and far between these days – I just got my iTunes statement through and to be honest with you it doesn’t even cover a packet of Fruit Pastilles. I’m on my arse, mate.

You’re literally in Willesden.
Exactly! All the evidence is there. I don’t need to spell it out for you.

How does one write lyrics for a wailing diva? Is it all ‘ooh baby I want to take you higher etc etc’?
No – it’s, er, inter­est­ing. It’s about shoes.

You sound like you’re moving about, are you on a roof?
No, I’m in a car now.

Are you on your way somewhere ‘important’.
Yes, it’s quite important. I’m going to Soho. I’m not allowed to say what I’m doing, sorry. It’s exciting though. Oh yes, it’s very exciting.

Anyway, just to get this straight, the big idea with your second album is that rather than rush something out and it be…
…shit…

…yes, shit, you’re going to take your time with it.
Well yes that was initially the idea.

And you’re going to release quite a few singles and then release the album as if it is some sort of ‘greatest hits’, and you’re going to pretend that was the plan all along rather than that you just didn’t record a second album quickly enough.
Well the first tactic of delaying the album was pre­tend­ing that I lost it at Heathrow. That one worked pretty well. The second was the Dizzee Rascal tune, which reminded people that I existed. And the third tactic is now to put a single out and hope that it does so well that people forget I haven’t made a second album.

And the Heathrow ‘episode’, in which you claimed baggage handlers at Terminal 5 had lost your entire new album, was rubbish?
That was concocted between me and my sound engineer, Jimmy.

Just to get this straight: you used Terminal 5 as an excuse for not having made an album, in the same way that a child might tell a teacher that their homework had been eaten by the dog?
Well sort of yes. I should make it clear that they did in fact lose our bags – that is fact – but it was not true that the album was in them. I would never check a hard drive in luggage. So the thing about Heathrow wasn’t so much a lie, as… Well… An untruth.

It was a white lie because all you wanted to do was buy yourself some time to make sure your second album was great. And the reason you wanted to do this was that your first album was mainly rubbish.
The thing about that first album is that I was making music to please myself and I didn’t think anybody else would hear the songs, but then I got signed and they came out. Now I know other people are going to hear them I’m going to try my hardest to make it good. This time it’s the idea that I like it, that you like it, that everybody likes it. I don’t want to make anyone angry. I got the impres­sion that people were actually ANGRY about my first album.

People found the first single annoying. But only because they heard it so much. But they only heard it so much because it was played as a response to people wanting to hear it. What are you supposed to do?
I don’t know.

You carry on, Calvin. That’s what do you.
Yes.

So next single: wailing diva. Have you got the third one lined up?
Well I have… And I haven’t. There’s two choices. There’s one that I’ve done that isn’t going to do very well in the charts. Then there’s one I’ve only just started that I’m quite excited about that probably will be the third single. But I don’t know. I DON’T KNOW!

What do people want from you?
They probably want me to go away, to be honest. The vast majority of people just would prefer it if I didn’t exist. And that’s okay.

All you have to do is please 1% of the pop­u­la­tion and that’s a Number One record. If 99 of every 100 people you pass in the street shouts at you about what a massive cunt you are it doesn’t matter because you’re STILL NUMBER ONE. And that’s what you need to remember.
But you still have to live your life. You can’t live your life with 99% of the world’s pop­u­la­tion thinking you’re  a cunt, can you.

Well look at Max Clifford. Let’s just for a minute discuss your video which is about you being a sort of Dr Frankenstein and there’s a stuffed toy bear, and then there are some ladies having a dance, and…
Thing is, ori­gin­ally it was about something. And then it became a sort of bizarre, er, I don’t even know what it is anymore. But I like it. It looks like a film. It’s pretty and that’s all that matters to me. No videos are really about anything any more, are they? They’re just people on a green screen dancing. Mine is just another one of them.

The good thing about making a slightly shit video is that nobody really watches videos any more.
Well they look on YouTube don’t they.

It’s amazing we’re so far into this interview without yet men­tion­ing your legendary Tweet.
Which one was that?

The one in which you announced that you were going for “a shit” in order to “make room for” your dinner.
Oh! Hahaha. I thought that was quite a good one but everybody turned out to be repulsed.

In the olden days you wouldn’t get Kate Bush going “just had a shit to make room for dinner”.
Well that’s the whole mythical thing isn’t it, about the 80s, when people say that it was better because you didn’t have access to them and they were more untouchable.

What’s your chart pre­dic­tion for the single?
Number 13. And I’ll be gutted. I keep thinking one minute that it’ll do well, then another time I think it’ll bomb.

People – and not even people whose job it is to be nice about you – have been talking about this as sounding like a Number One single.
Yeah but ‘sounds like’ and ‘is’ are well different. And I’ve not been doing much promo on it.

Why not?
Well, nobody really knows what to do. I’ve got three singles coming up before the album so we’re sort of making this campaign up as we go along. They’re saying we won’t go for it on this one, or on the next one, but for the third one they’ll really go for it. But what if there IS no third one? This is the problem I’m facing at the moment but it’s all good fun.

At the end of the day Calvin it’s only pop music.
Yes.

On the other hand, it’s your career we’re talking about.
Yes.

But we’re all in this together, like in the High School Musical song.
You try and build up the most terrible records and pretend they’re amazing. You’ve been alright recently actually but I’ve never liked a Song Of The Day, I can say that with confidence.

Your new bloody single was Song Of The Day!
Was it? I don’t think I saw that. Well in that case thank you.

That was an interview. For more inform­a­tion on 'Acceptable In The 80s' hitmaker Calvin Harris have a look at his website, www.calvinharris.tv.

Frankmusik — Better Off As Two