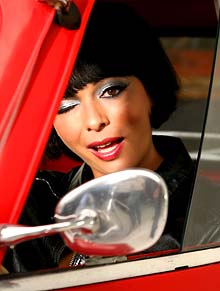 The nine lives of Betty Boo.

Betty Boo is back. Again.

Since she is one of the best popstars in the history of good popstars, this is very exciting prospect indeed. More exciting was a chat we had with her about her past, her present and her potential futures in the world of pop music…

These are the nine lives of Betty Boo…

Life 1: Betty Boo from the olden days.
"Betty Boo was a feisty character who had a split per­son­al­ity. Sometimes she lived on the Planet Boo and sometimes was just big and flam­boy­ant, anything went really. She wanted to break all the rules. Also – hang on I'm going to talk in the first person now, it's just getting really weird — this sounds like a history programme where someone is talking about Catherine of Aragon. Anyway, I'll just try to talk about me. Basically I wrote my own stuff, I wrote it all in my bedroom and I had a lot to say really. Having been bullied when I was younger I just saw it as a way to get my own back on everyone."

Life 2: Wigwam.
"Wigwam was a little bit of fun, it was ori­gin­ally Ben Hillier, me and Alex James from Blur and it all evolved from being a hobby where we were just mucking around to us deciding to make it into a record. We did have plans to make an album but we all just went our separate ways, Alex likes doing his thing, being a media person and a cheese farmer. I haven't tasted his cheese and I don't think I'd want to either! I like cheese, but there's something a bit weird about eating cheese when someone you know has had his hands in it. There's something rather unsavoury about someone else's cheese."

Life 3: This Jack Rokka col­lab­or­a­tion thing she's got out now.
"At the moment I'm planning a new record and it is very Betty Boo. I've been col­lect­ing so many tracks, they are all very camp and very fun. I've worked with Digital Dog – who are Jack Rokka, who are brilliant. There's nobody really famous working on it yet, it's not my thing to get the latest new producer in to work on my tracks, I think that's best left to Kylie, although maybe later I'll need a bit of help. It'll be Christmas in a minute so I'd say you'll be hearing the album in early spring."

Potential life 4: Proper popstar.
"I think it's the perfect time for Betty Boo to come back, thank goodness for Amy Winehouse and Lily Allen to be honest, because pop music was starting to become a little contrived and con­trolled but those two are the real deal. In a way that's a lot of what people like about Betty Boo in the old days, that there was some cred­ib­il­ity behind a pop artist."

Potential life 5: New Rave.
"New rave? What's that? It sounds like fun though. If it's all about floures­cent stuff new rave sounds a bit like Agadoo."

Potential Life 6: Indie.
"It is very difficult to remember all the names of the bands, I mean how many bands are there called 'the' something – answers on a postcard please. Although it is good that kids out there have got an identity and an interest in music."

Potential Life 7:
R&B.
"I love the way that hip-hop has fused with other genres, like with Nelly Furtado and Gwen Stefani. I find it really inspiring that an artist can leap from being a star in one genre to being as big in another."

Potential Life 8: Acoustic.
"Would I bother though? It's a bit wet innit – ooh let's sing something about love. I have written some songs that are very tra­di­tional, in terms of being very guitar based songs that I have given to my pub­lish­ers which will probably find a home with someone, so I am capable of doing that but I'm thinking of putting them out under another identity. Besides, you don't see Madonna doing an acoustic album."

Potential Life 9: Opera.
"Pavorotti dying was the end of an era really. He ate a lot didn't he, I don't want to be dis­respect­ful but it was on the cards wasn't it. I don't really have an interest in opera – but I'm alright with a bit of Madame Butterfly I guess… Oh, and one of Il Divo is well dishy."

Thank you very much Betty Boo.

Sugababes — 'My Love Is Pink'