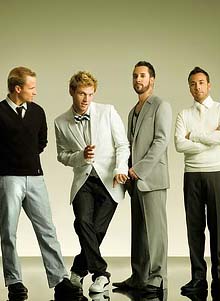 "I would be the dessert because I’m satisfying."

One minute Backstreet Boys are there, releasing Number One records like nobody’s business, the next they’re gone. Then they’re back again, then gone again and so on…

Nick Carter has been playing this game for 14 years. He used to be one fifth of the Backstreet Boys, but since Kevin quit, he has been promoted to a quarter, which means he is better than he was last time.

We spoke to Nick recently and here is what was said…

Hello Nick. How many comebacks with 'Backstreet's Back' headlines is this now?
You know what, whatever they wanna say, I don’t care any more. It can be a slogan of ours for the rest of our freakin’ lives. As long as people still come and see us, still buy our albums — and are still happy — then we’re back. Alright.

You have a new single which is not about Backstreet Boys being back. What is the new single about?
‘Inconsolable’ is about a person who really, really loves somebody but they just can’t go there because of something that has happened in the past. I per­son­ally love the song because it’s a great rep­res­ent­a­tion of what we are about.

After ‘Incomplete’, and now ‘Inconsolable’, are you planning any more songs whose titles use the ‘In-’ prefix?
Inconsistent! Yeah, that’s the next single, that’s an exclusive.

You could have had ‘Incomparable’. Or ‘Incontinent’.
Or Incomprehensible…

Do you think, in 2007, the world really needs a boyband?
We were never a boyband.

Really?
We always thought of ourselves as a white vocal harmony group (clang), we didn’t model ourselves on Take That or anything. Maybe things started off a little boyband-ish but after a while you shed that. The way we did this album was different. We worked with Dan Muckala, who wrote our song ‘Incomplete’ and we said, ‘Look, Dan, let’s do something different’ and we sat down, and got the songs that we wanted.

Good. Do you prefer MySpace or Facebook?
I’m on MySpace at the moment, because it’s cool to customise your page.

Are you really ‘on MySpace’ or is someone from your record company ‘on MySpace’ for you?
No, it’s me! I check it all the time! I do my own little videos and stuff like that. I’m gonna start blogging too; I’m always involved.

Shall we look forward to reading 2000-word blog posts because The Internet said something about your waistline?
Too many people are judged on the way they look. As long as you’re healthy and you’re active, that’s the important thing. You look good if you feel good. People should be judged on the things they do, not how they look.

Speaking of how people look, you were once voted one of People Magazine’s 50 Most Beautiful People. Are you still beautiful Nick?
I don’t really care. If they wanna say that, that’s nice, but it’s all kinda mean­ing­less. I got that because of who I am, I didn’t do it on purpose.

If the Backstreet Boys were a meal, what part of the meal would Nick Carter be?
I think I would be the dessert because I’m sat­is­fy­ing and I’m a guilty pleasure. AJ would be the meat.

Thank you very much Nick Carter.

Backstreet Boys — 'Any Other Way'