Good. What are you up to?
At the moment, we're on our way to rehears­als for X Factor. I'm super super excited.

[Editor's note: This happened several weeks ago so the excite­ment has probably faded now, but you get the general idea.]

It must be a bit weird going back there.
It is really really weird. I think we're all a little bit scared. Obviously it's been a year since we've been back there, and it's out first per­form­ance of 'DNA'.

It's an amazing song.
Aw, thank you!

It's probably the best X Factor single of the year.
Really? Oh wow! Thank you so much!

Working with Nicola Roberts on 'Going Nowhere' off the album was…
…abso­lutely amazing. She's so lovely. That's one of our favourite songs on the album, so we were really lucky to have worked with her.

Did you find that she had a different take on the other side of the pop industry?
Yeah. Well, I was really surprised, 'cause I didn't know she wrote songs. I wasn't aware. And then when she wrote 'Going Nowhere' for us, it was literally one of our favourite songs and we abso­lutely love it. She's like the little dark horse of Girls Aloud, she's so talented.

Something like that. Your beat­box­ing on 'Going Nowhere' takes one back to your days in Faux Pas.
AHHHHH!!! (Roars with laughter again) Yeah, we kind of wanted to bring back that old side of us, 'cause we did it at Judges' Houses, and everyone asked us to do it more, but we never really got the chance to do it on X Factor. So we really wanted to do it on the album, and have a cool, chilled song and show a cool side to Little Mix that people haven't seen yet.

Are you one of those people who beatboxes at the back of the bus?
Erm, no! I wouldn't neces­sar­ily call myself a beatboxer, I just muck around doing it, and the girls were like, "yeah, you should do it on the album!". So we did it.

And what about working with T‑Boz? She's said now that she wishes she'd kept 'Red Planet' for herself.
Well, we just feel so lucky to have worked with T‑Boz. TLC are one of our biggest inspir­a­tions of all girl groups. And then it was amazing to work with her. We just felt really really lucky, espe­cially to have her on our first album.

Were you a bit annoyed when you saw her in that Stooshe video?
No! Not at all. I think it's really nice that she's working with loads of other girl groups.

'Madhouse' is one of my favourite songs on the album, but why is it the last track?
'Cause we've kind of done the album in sections.

Talk me through that dark place in your mind.
Well, we def­in­itely got into the dark place with 'DNA'. We all wanted to show people a com­pletely different side to Little Mix. Obviously 'Wings' was very upbeat and fun and colourful, and we wanted to show how versatile we were. We put it in quite a lot of our songs on the album, and we hope that people love it.

What's the darkest thing about you, Jesy?
Erm… I don't know! I don't really have anything that dark about me.

So are you pre­tend­ing to be darker than you are?
Well, we're def­in­itely pre­tend­ing in 'DNA'. But that was fun. We like to act a little bit, and play a character.

What happens to the man in the video after you tie him up?
Well, you'll have to wait and see. It's 'To Be Continued.'

But is it actually going to be continued? Lady Gaga's 'Telephone' was always 'To Be Continued' but look how that turned out.
Well, we might continue it on our tour. Come to the tour and watch it, and then you'll see.

How long does it take you to do your hair?
Well I don't actually do my hair, my hairdresser does it. I would say about an hour though.

Is it all yours, or is it extensions?
It's all mine! No I'm only joking — I wish it was! (Chortles happily) It's extensions.

Did you have some trouble with a cheap weave?
Yes I did, and I was not happy. I really wasn't. I hate weaves, I like clip-ins. Weaves hurt my head, and they're not good for your hair either.

Do you have to take it out before you go to sleep?
Yes! The other day I had a ponytail in — me and Leigh-Anne have got these big long ponytails that we wear — and I took it out when we finished rehears­ing, and I think everyone was like 'oh my god'! They were looking at me like 'what the hell'.

It does sound a bit gross.
Yeah. And then I carried it in a box.

A shoebox?
Yeah. Me and Leigh-Anne keep our hair in a shoebox to keep it safe.

Do you think the Little Mix dolls look like you? Or have they basically just put a lot of big hair on an old Sindy?
(Laughs) No! They actually do look like us. Leigh-Anne's is the spitting image of her. It's amazing. They've all got our hair. Well, mine's got red hair, but I did have red hair. So mine doesn't look exactly like me, because I've got different colour hair.

Is there a song on your album that you'd press the skip button on?
No. Definitely not. And I'm not even lying. That's one thing that we wanted to have on our album — like, I hate it when you buy an album and there's a few good songs and then you'll skip loads of other 'cause you don't like them. We wanted to make sure that every song could be a single.

Well a lot of artists release an album, and you have the album, and then there's the iTunes bonus tracks, and then there's the special edition, and you end up having about 45 songs and only about four of them are any good.
Yeah. We really didn't want that to happen. We all sat around when we were first making the album, and I said "I really don't want to have an album where you listen to it, and you think 'oh, these songs are good, but I'll skip all these'." We made sure that there were none of those songs.

I saw a video of you per­form­ing in ASDA the other day.
Oh yeah! That was actually a really fun gig. It was at the ASDA Headquarters.

When you are doing stuff like per­form­ing at ASDA, does it get to a point where you think "well I appre­ci­ate the oppor­tun­ity but I'm quite looking forward to the day we don't have to do this any more"?
(Laughs) Oh no, not at all! They're gonna really promote our album, so we're really grateful to them. It's nice to be able to perform for them.

Are they going to have a big cardboard cutout of your face?
Oh, I blummin hope so!

Ellie Goulding and Skrillex are going to make some music together 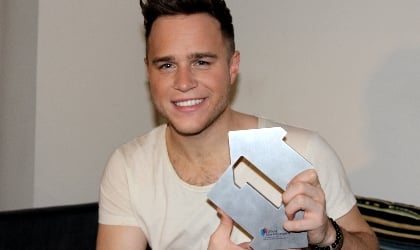 Olly Murs has the UK's new Number One single