Beth Ditto has made an EP of songs we like so she's allowed on Popjustice for a chat about that and some other things. This is that chat. 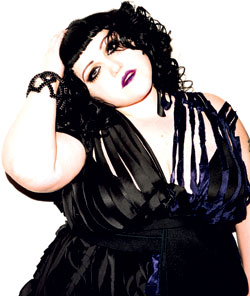 Hello, Bethany Ditto!
Nah-huh, it's Mary-Beth. But I've never gone by Mary, never in my whole life. I was named Mary-Beth with the intent to be called Beth. It's very American. Some people are like, “Abigail? We'll call her Abi.” I'd never say Mary-Beth, but you can call me Beth.

What was your best Christmas present Beth?
[very excited] Oh God, good question! I love Christmas. Well, I got an iPad, which is incred­ible. One other was from my girl­friend, it's a little coin necklace that has two people [on it] and it's from the '50s and on the top of it it says 'going steady'. Which is so cute. So that's my favourite sen­ti­mental gift. [phone rings]. Quit! It's my Dad, Homer. There's Homer Ditto on the line.

Is that his real name?
Yeah, you want me to answer it? “Dad, what's your real name?” I feel like I should because people never believe me.

So, the iPad was your best gift?
Well, no. The iPad was upstaged. So I had one really fucking awesome, like, kiddie, like “woah” gift and that was the iPad, then I got the really great sen­ti­mental gift but I think the coolest gift I got this year was probably my vac and steam Shark. Do you have these? It's a floor mopper that vacuums and steams the floor at the same time, so you don't have to use water and you don't have to sweep. So, you're vacuuming and mopping at the same time.

[stupidly] Onto carpet or wood?
Only wood or tile. How cool is that?  I have a hoover for the hardwood floor and a hoover for the carpet. But imagine, not having to sweep. It's a very adult gift. I'll be thirty next month and I think this is going to be a good year this year. Thirty is going to be fucking awesome. I mean, who gives a shit [about getting old]? You could not get me to trade being thirty for twenty-one ever. Fucking ever. That shit sucked. I mean it was cool, there was freedom, I was wasted, legal, but fuck that, I don't want to do that.

So, you've ditched the other two. What's that all about?
They suck! No, just kidding. What did Nathan get me this Christmas? He always gets me some crazy piece of art. He's so sweet that way. I think I got a sub­scrip­tion to some magazine. Ha, “To some magazine!” Yeah, “some bullshit. What's his name?” It wasn't a two-in-one steamer shark  that's for sure.  Erm [suddenly remem­ber­ing the question] I didn't ditch them at all. They're still very much around. In fact, we're talking about doing the tour around the EP as one big party, hopefully in March or something. I mean, if I have time, because of Gossip. Yeah, anything but ditched them.  We were in Arkansas at the same time when the birds fell out of the sky, was literally in that town. My mum lives right there.

So, wait, birds were literally falling out of the sky?
You didn't hear about that? On New Years day. Yeah, like showering birds. And a hundred thousand drum fish just belly-ed up in the river. Arkansas is the on the bible belt so it's extremely religious so they're all like seventh seal about it. I mean, I don't believe that shit at all. My mum was driving to work and she said that she saw the birds on the way. It was over one cul-de-sac only. They had haem­or­rhages in the air and people were saying it was due to the fireworks, but the thing is in Arkansas not that many people set off fireworks at new years. Also, why would that kill the fish? But, yeah, I was in that town.

And were Simian Mobile Disco tender lovers?
They're excellent lovers. Really great. Yeah, a really good trans­ition for me to see that I could work with other people. It's really amazing because when your creative rela­tion­ship is so inter­twined with someone else you really can't tell if it's you or them or what part is you and now I can see that it really is 50–50. You can't tell if you really are any good at it or not. For the Cruel Intentions [a song taken from Simian Mobile Disco's 2009 album, Temporary Pleasure] session though I had to get drunk. I'm not used to it. It was like undress­ing in front of them for the first time, like, “I've only done this for my husband”. I just needed to be com­pletely wasted.

Did you have the lights on this time? Maybe just one glass of wine?
Yeah, one piece of clothing at a time. I didn't have any drinks this time, they wouldn't let me. I was like “is it too early for drinks?”. By the end of the week it was much easier.

Some people employed to say these things have compared the EP to early Madonna. What say you?
I haven't read anything about it, I don't ever read reviews ever, even if they're good or bad. For me, the reference points were Sade and Whitney Houston, but then for them [Simian Mobile Disco] there was a lot of crazy ref­er­ences. Some of them I'd be like, “I don't know what you're talking about. Like, what?!” I mean I was obviously a pop kid raised in Arkansas. So I was like, “yeah, whatever. Hmm, vinyl.” You know Nathan's one of those record collector people too and it's really nice for me to be around that because alpha­bet­ical order blows my mind. Of course I can say the alphabet, of course I get it, but I have such bad ADD that record shopping kills my soul. A phone book? Fucking forget about it. I'll get so dis­trac­ted by the Yellow Pages that I'll be like “I didn't know there was a flower delivery service in blah blah blah”.

Or, “there's a taxidermy place, I'll buy a stuffed goat”
[laughs] I'd have twelve stuffed goats if I could. “I want to have these birds stuffed from Armageddon”. [suddenly serious] That would have been amazing.

The songs all seem a bit boo-hoo. Does that come out more with dance music where your singing in a less 'balls out' kind of way?
Every Gossip song is sad. I think [dance music] gives the vocals more space and it also sets a com­pletely different mood. Not inten­tion­ally though, not on my part. I don't write music so when I go in there it all just comes out, like, the rhyme scheme just comes out.

Can you believe he doesn't write his stuff down?
I can believe that.

Oh…
And Jay‑Z too and he has even crazier shit going on. I do write it down as it comes and I'm sure they have to write some of it down, right? Sometimes I'll have an idea for a hook but then around that hook everything comes, so then you have to piece together little puzzles. I'd say that 85 – 90% of it comes off the top of my head really fast.

My favourite lyric on the EP is…
You know the lyrics!

Why did you decide to release with famed dance label DeConstruction?
I think they would want me to be all “dance label, Hacienda baby”, but it's not that cool. I'm not going to say that. I knew Mike Pickering [he of M People fame], it wasn't far from home and it felt natural to go with Mike Pickering again.

Are you familiar with M People's oeuvre?
Yeah. In fact, my best friend was really obsessed with M People and I was like, I know that guy, and it was the first time he was ever impressed. Ever. I've met so many people and he's impressed with guy who played sax in M People.

What's your favourite M People song?
The hit. What's that one? [starts singing Movin' On Up] I don't know a lot of songs and I don't know names. My best friend knows every single M People song and I'm like, how did this even happen?

One of their members was called Shovell. Would you ever let Hannah or Nathan change their name to a gardening implement?
Of course. We give each other weird little nicknames often anyway. Nathan is a hoe, def­in­itely. Hannah is a fork, or maybe garden shears. I don't know what I would be. My nickname for a while was Bertha Dumptruck and Nathan still likes to call me Wee Widdily Winkerly. Sometimes he calls me Butch.

When everything was happening in the UK with Standing In The Way of Control taking off and everyone was talking about you eating squirrels, etc, did you ever think “that's not me, I like sitting in my pants watching Friends, she's a caricature”?
I'm both of those people I think. I'm the same person sitting around in my pants watching Friends as  I am the person who ate squirrels as a child. I don't think it got blown out of pro­por­tion. All those stories were told by me. They were totally true.

Would you like to say goodbye to Dmuper?
Yeah, bye Dumper. I just took a dump-er before you got here.