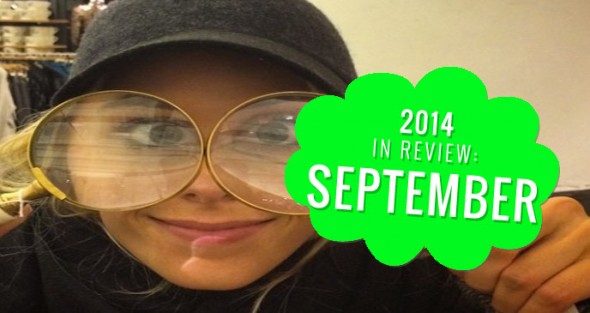 September 2014 was a month in which various things happened in ‘the world at large’. But how did these things impact the nicest person in pop, Mollie King from The Saturdays? Well let’s find out shall we.

Enduring girlband The Saturdays finished their farewell tour in September.

No?
No def­in­itely not. (Laughs) Oh my gosh, we had such a good time. It was just amazing seeing fans their every night. I know it sounds silly but every night we came out of the floor — that was our entrance to the stage — and I was always so shocked that people had come to see us, not just our friends and family. It was like ‘oh — real people’.

Did you ever imagine you’d get to release a Greatest Hits? Not many pop acts get to do that.
It makes me feel really old. I think it’s something you always dream of but to have a Greatest Hits is abso­lutely surreal. It’s got loads of tracks on it and I can’t believe we’ve had so many singles out, it’s madness.

Not that you were asking but ours is ‘All Fired Up’.
Ah I love that one too.

Also in September, a photo of a house for sale in Ipswich was withdrawn by estate agents because it featured a picture of a pig in the living room.

Oh my gosh. Well was the pig alive or dead?

Alive. It was the family pet.
Oh wow, that’s madness. Sorry, so what is the question?

How clean is your house?
Well, I’ll be honest, it’s very clean but not very tidy. I live in an apartment [SHE MEANS FLAT] so I have a room which is like a walk in wardrobe and that’s where everything gets stored and then I shut the door when I have guests over and I pretend that room doesn’t exist.

A US flight was diverted in September after a row broke out between two passengers when one of them reclined her seat in order to give her more room to knit.

If you were to knit each Saturday a little something, what would it be?
(Laughs) I’d probably knit Una and Rochelle’s girls little dresses or something to be honest, because that would take a lot less time than an adult’s sweat­shirt. Then I’d probably knit Frankie a little boy’s scarf for her son and then Vanessa, oh God knows. Maybe a nice warm pair of knickers (!). I don’t want to be knitting for days.

According to some spurious research from Cornell University watching action films is likely to make you fat.

What sweets do you have when you go to the cinema?
Oh my God, I’m a salted popcorn addict. Whenever someone says ‘oh let’s share’ I’m like, ‘no I don’t want to share’. You know if you go on a date to the cinema and they try and be romantic and say ‘oh do you want to share a popcorn?’ and I’m like ‘no no, this is going no further’.

Also never trust a guy if he asks you to put your hand in his bucket of popcorn at the cinema.
(Laughs) Exactly. We all know what he’s thinking.

Everyone was chucking water over each other in September, and in an Essex Waitrose the Police got involved after a man stole a bottle of water, a bag of ice and a bucket in to do the ice bucket challenge.

Did you partake?
I did. I actually put a bucket of water over my head and then my friend thought it would be funny to lob her bucket over me so I actually got two buckets covering me. I was pos­it­ively a drowned rat, which wasn’t a great look.

Is there anyone you’d like to pour boiling water over?
Ooh…Well not that I’m going to tell you about to be honest.

Also in September, inspectors found the body of a lion in a UK restaurant’s freezer, with the owner claiming he was given it by a local zoo to feed his dogs.

What was the last meal you made that people refused to eat?
I’m not really much of a cook. When people come over to mine it’s mostly Marmite on toast to be honest. I’m like ‘come over for dinner, I’ll cook’ and then when they arrive I’m like ‘takeaway?’.

Also if someone’s cooking for you you don’t get to see them much because they’re in the kitchen cooking etc.
This is true. Also you can’t beat a good popadom can you.

U2 gave away their new album, 'Songs of Innocence', to all iTunes users in September. Cheers guys!

Have you ever given an unwanted gift?
Yes. It was secret Santa and I totally forgot about it and so I gave Rochelle an egg cup, because I didn’t want it to be honest. I’m not going to be boiling eggs. She looked at me with such disgust. She was like ‘are you actually giving me that?’.

Was it one you brought or were you just given it?
Well, to tell you the truth I actually found it in my mum’s house, but it was one of her best ones. Not a grotty one. I did go to effort of wrapping it in some kitchen roll but she worked out that I’d forgotten about it.

September was the driest since records began in 1910, which is interesting in a way.

Do you think this is proof that global warming is a myth?
Is a myth? (Sighs) I’m going to leave that up to the experts I guess. I’m enjoying the heat while it’s there. I’ll leave that to them.

What’s your favourite old wives’ tale?
Oh I don’t know any. I’m really bad with things like that. Give me some examples.

A service of evensong at Bath Abbey was abandoned in September because the choir was drowned out by a busker outside playing 'Bridge Over Troubled Water'.

What’s Una’s acoustic cover of choice when she’s prac­tising her guitar?
Erm, do you know what she’s always wanted to cover? That Christmas one. The Pogues. I know it’s a bit of a random one, but you have no idea of how long she’s been banging on about covering that.

Finally in September, lots of nude pictures of famous people leaked after someone hacked into iCloud.

Whatever happened to just keeping some polaroids under your bed?
(Laughs) That’s a very good question.

It’s too risky otherwise.
You know sometimes when they’re really hot pics then I do think ‘come on, you’re def­in­itely not minding that being out’.

The worst is when you show someone a picture on your phone and then they suddenly start scrolling through.
Oh my God, I know. That is why I can never do that because you know when you hand your phone over and say ‘these are my pictures from holiday’ and you worry about them scrolling too far. That is why you should never do a sexy pic. I don’t want to put people off their dinner either.

Thank you Mollie King from The Saturdays for that fas­cin­at­ing insight into your thoughts on the month of September 2014. We hope you had a sat­is­fact­ory year and wish you all the very best for 2015. 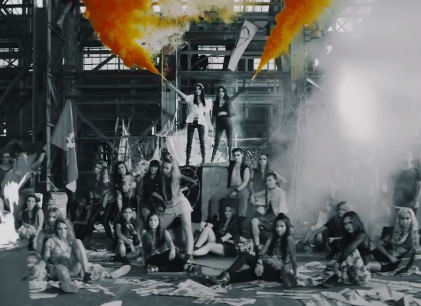 The Veronicas — 'If You Love Someone' 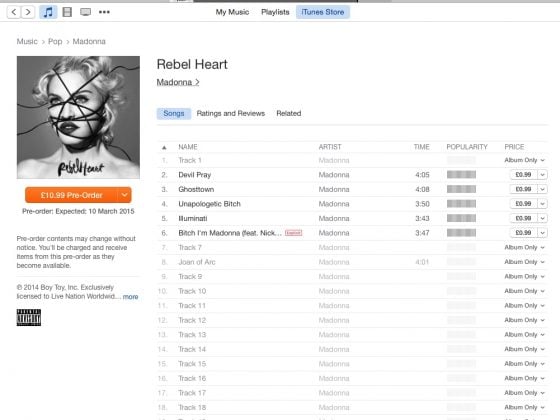