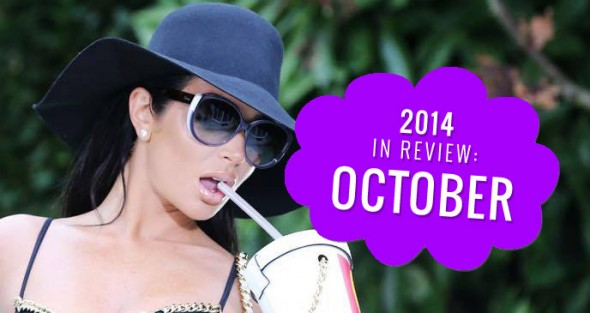 October 2014 was a month in which various things happened in ‘the world at large’. But how did these things impact The Female Boss, Tulisa? Well let’s find out shall we.

‘Living Without You’ by perfumier and returning popstar Tulisa arrived online in October.

What did you miss most about being a popstar when you had to stop doing it for a bit?
The fact that I was just known as a celebrity. People forgot what I do, they were like 'what does Tulisa do nowadays?'. I never wanted to neces­sar­ily be famous. I wanted to be a musician and be suc­cess­ful and obviously fame is something that comes with it which I'm okay with, but as long as I'm famous for the music. So having that taken away from me, I sort of became just a celebrity. I didn't like that very much.

Your press release said that you were back but that we, the audience, always knew you would be. Was there a point where you thought you might not bother coming back though?
I never thought I wouldn't bother, I just thought I might not be able to. (Laughs) I feel like I always tried to see the light at the end of the tunnel. The second it happened I was ready to retire and then I thought 'no, I'm not finished yet, I'm going to do it all again'. I've spent the whole year hungry to come back.

Which is good to hear because there are some popstars you sense maybe aren't that hungry for it.
People get drained when they do it for such a long time. When it happened I'd been doing it for eight years in a row. People forget that with N‑Dubz we were famous on the under­ground scene so we still did all our hard graft then. I think we did 280 shows in one year and I hadn't stopped really because when we split up I went straight onto X Factor. It was constant. In this industry it's all about giving your energy and enter­tain­ing people and I basically just became drained. Sometimes people just need a break, but not only did I get a break I got a long long break and had it all taken away from me, so I guess that helped bring the hunger back. In that respect I'm glad that it happened.

In other less Tulisa-focused news, in October backpacker Daniela Liverani found an actual three inch leech living up her actual nostril. It had been there for a month without her realising!

How did she not notice? Surely she couldn't breath? That's so weird.

When was the last time you found something unex­pec­ted in a small crevice?
(Thinks for a bit) I woke up one day a few months ago and you know earwigs, they look like centi­pedes but with fangs and shit, one of them was crawling along my eyelid. That was pretty horrific. I also had a wasp nest outside my bedroom window and I left my window open one night and I woke up covered in wasps. It was an ongoing battle and I literally went to war with a wasp in my room and my tools consisted of hairspray and a tennis racket.

Hairspray's a pretty good call actually.
It sort of sticks them to the wall. I don't like killing bugs but with wasps I'm like 'hey, you want to sting me, I'm coming for you'. It was self-defence!

Bob The Builder was given a CGI makeover in October, as well as brand new voice.

How good are you at DIY?
I'm actually really good you know. No one's ever asked me this before.

Can you put up a shelf?
Can I put up a shelf? I built my whole wardrobe room! I'm actually really good with DIY. It's a bit of an in-joke between me and Gareth [her PA] because we live together and I'm the female in the house but I'm the one who's really good at DIY. If there's something that needs building I'll get my toolbox out and just start building away. I have a proper full set of tools. I can build a wardrobe, a bed, shelves, the lot.

Middling comedian Al Murray objected to some praise he received from Lib Dem leader Nick Clegg during some sort of political conference thing in October.

Last Saturday perhaps?
(Laughs) No no no. Come on, that was the final, they all deserved to be there.

Are you quite an honest person?
I'm trying to think. I don't tend to be nice for the sake of it. That's my downfall. I struggle with fake conversations.

Have you ever said 'I love you' and not meant it?
When I get that I give the awkward 'you too'.

A theatre production based on a play by your friend and ours Franz Kafka opened in Japan. One of the main actors was a robot.

If they could invent a robot to replace you and do all the boring stuff popstars have to do, what would you get up to instead?
I would spend all my spare time learning to do the things that I always wanted to do but just don't have time to. So I'd learn to play the piano and the guitar, I'd learn Greek and I'd become a black belt in karate.

A professional gambler lost a High Court battle in October against a London casino over a disputed £7.7m in winnings, which he claimed he was owed.

When was the last time you went to the bingo?
I've actually never been to the bingo. It's not for any par­tic­u­lar reason, I've got loads of friends that go and they're always saying how much fun it is, but I've never got round to going. I want to try it.

You could have your own Tulisa dauber or whatever it is?
I could. I plan to do it. It's on my list of things to do before I die. (Laughs)

Maybe we could organise a sort of fan event where we all just go to the bingo?
Brilliant. There you go.

In his new book, released in October, former Sunderland manager Roy Keane said he realised the team were in trouble when one of the coaches played ABBA’s ‘Dancing Queen’ before kick-off and no one complained.

What song would you use to get a football team excited about a match etc?
I would pick Kasabian's… Oh what is the song called? [Sings it for a bit]. It's one of my favourite songs so I have it on my iPod…

You have a separate iPod?
I have an iPod, yeah. I carry one round with me because I don't want the songs on my phone. I feel a bit old-school with it. It's an iPod Classic as well.

They've stopped making them now.
Have they? I've got an antique. But anyway, the song's called 'Club Foot'.

Okay, so you'd play that to get them all roused or whatever it is they need to be before a game.
Yes. Or Prodigy's 'Smack My Bitch Up'.

What’s your favourite ABBA song?
It has to be 'Dancing Queen'.

Would you say it's a good song to play to foot­ballers before they play football?
No I don't think so. You need to work them up.

Loads of Pacific walruses who were unable to find sea ice on which to rest in Arctic waters started coming ashore in record numbers in north-west Alaska in October.

But do you have your whiskey on the rocks or without ice?
I have it without ice. I don't really like the taste of alcohol, I just drink for the feeling, so I find that if I want to feel a bit tipsy the easiest thing for me to do is go for something I have to drink less of to get drunk, so I don't want it watered down. So no ice for me.

If someone was to buy you a drink in a bar what should they get?
I am a Red Bull and vodka drinker and a wino. Rosé please.

In October a French bank called Groupe BPCE launched a service that allows its customers to use Twitter to send each other money.

If you could tweet a tenner to anyone right now who would it be?
The honest answer has to be somewhere char­it­able. I guess I'd look at where is in need right now and tweet it there.

If it could only be to a celebrity or musician friend, who would it be?
Niall, just to take the piss. He doesn't need a tenner. 'What do you get the boy who has everything?' I'd tweet him a tenner and tell him to get himself a pint.

Finally in October, North Korea released American Jeffrey Edward Fowle six months after detaining him for leaving a Bible in a hotel.

What’s the worst thing you’ve ever left in a hotel room?
Oh God. How honest can I be? [The line goes dead just as she's saying something probably scan­dal­ous] Oh, actually, I'll tell you what, many many years ago an ex-boyfriend bought me a diamond ring and I left it in the hotel room by mistake. He was pretty furious. And it wasn't insured. Then another boyfriend later brought me another diamond ring and it was a bit big and I wore it out one night and basically it dropped off and I lost it. So I have this thing that if I'm not meant to be with a man I will lose my diamond ring.

Thank you Tulisa for that fas­cin­at­ing insight into your thoughts on the month of October 2014. We hope you had a sat­is­fact­ory year and wish you all the very best for 2015.