April 2014 was a month in which various things happened in ‘the world at large’. But how did these things impact perpetual dancer Kiesza? Let’s find out shall we.

In April, golf man Tiger Woods announced that he’d undergone back surgery for a pinched nerve, and went on to miss come big golf tournament thing.

But what gets on your nerves?
Well, I actually crushed a nerve in my elbow recently and I’ve been recov­er­ing ever since. It crushed it so it cut off the signal that that nerve was giving to the muscle so my entire forearm, my pinky finger and my ring finger on my left hand went com­pletely numb and the muscle started deteriorating.

A court stenographer in New York was discovered to have written utter nonsense instead of actual court transcripts, potentially jeopardising thirty court cases.

What’s your worst lyric?
My worst lyric? Gosh, I don’t even know. Let me think. I can’t answer that question.

Are you saying all your lyrics are amazing?
No. There are songs that I write that I know aren’t lyrical mas­ter­pieces, but nor should they be. They’re not that type of song. It’s not meant to have too much depth.

Your friend and ours Stuart Parkin was awarded the Millennium Technology Prize for breakthroughs in magnetic storage capacity or something.

But how big is your wardrobe?
Wow. Oh my wardrobe is deep but it’s not excep­tion­ally large. I travel a lot so I’m living out of a bag really. It’s all quite limited. I get a lot of stylists bringing me clothes that I wear once or twice and then return.

A total lunar eclipse occurred in April, which was exciting.

Really, why?
Have you ever howled at the moon?

No.
It feels really good. It’s like a release. You should do it next time. When you howl everyone around you wants to howl too and then you under­stand why wolves howl too.

If you could clone a famous person who would you chose?
That’s a tough one. Definitely I’d like to clone Michael Jackson and Einstein. In fact I’d like to splice them into one person.

That’s one clever popstar.
It would be inter­est­ing I think.

The government announced that Cornish people would be granted minority status under new Council of Europe rules.

Do you think Jessica Cornish should go and live in America?
Er. I don’t know. Not if she wants to live in the UK. She should live wherever her heart is at home.

Whereabouts?
She should live in New York, it’s a great city.

Copies of ET and some Atari games buried in 1983 were discovered in a New Mexican desert in April.

What would you bury in a time capsule to represent 2014?
Let me think about that for a minute…I would put a pair of my Reebok sneakers in there. My authentic, designer Reekbok sneakers that came out this year. A pair that I actually wore.

You could put ‘Hideaway’ in there and that would represent 2014 quite well.
Can we put singles in? It has to be a physical copy right? I did put it out on vinyl actually.

Scientists announced the discovery of Kryptodrakon, the oldest “winged lizard” ever found.

But do you see the appeal of owning a lizard?
Definitely.

But you can’t hug them.
You can hug a lizard! Of course you can.

But you can’t stroke it and play with it?
You can. Playing is something that requires ima­gin­a­tion so you just have to use your ima­gin­a­tion. You can play with anything really. You can have a con­ver­sa­tion with a lizard. Plus a lizard is the closest thing we have to dragons, which makes them really cool pets.

What would you call your pet lizard?
(Thinks for ages) I’d call him Sphincter.

Also in April, a meteorite shower was recorded in Russia.

Baths or showers?
I have more showers but I prefer baths. I love having a bath. I love soaking up the water. I feel like I’m in the womb again, I just relax.

Finally in April, in pollution news, an official study released by the Chinese government revealed that around one-fifth of China's soil is contaminated.

When did you last soil yourself?
When did I last soil myself?! As in poo my pants?

Yes.
I can’t even remember. It must have been before my memory. I haven’t actually soiled myself in recent memory, which is probably a good thing. We’ve all soiled ourselves though. It’s better out than in.

Thank you Kiesza for that fas­cin­at­ing insight into your thoughts on the month of April 2014. We hope you had a sat­is­fact­ory year and wish you all the very best for 2015. 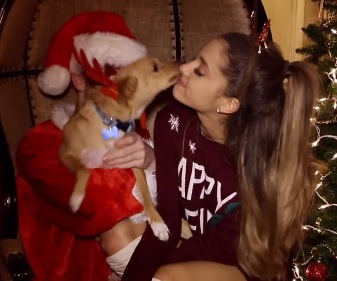