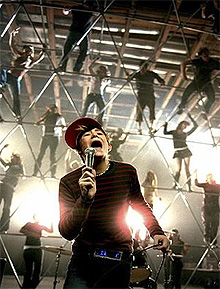 "A FACE FULL OF SPLINTERS AND SMASHED NUTS"

The following is all true. We know, we watched him say the words.

What is your mum called?
Karen.

Did you go anywhere nice on your holidays?
Disneyland, actually no it was Disneyworld.

What is your favourite chocolate bar?
Galaxy.

What animal would you gladly never encounter in your lifetime?
Dogs, I hate them. They are stupid, espe­cially big ones.

How many pints can you drink before you fall over?
Six or seven. Honest.

What would you like for dinner?
It depends what's on the menu.

How old is too old for a man to go skateboarding?
40.

How old were you when you found out about sex?
About nine? Perhaps.

What colour are your pillows?
Orange.

What did you last buy from eBay?
A skate­board deck.

What was your worst subject at school?
Maths, I hated it.

When did you last take a photo of yourself?
About three years ago.

What is the worst day of the week?
I never have bad days.

What side of the bed do you sleep on?
The middle side.

Semi-skimmed or full fat?
Semi skimmed. Tastes the same but without the added fat.

Surf or turf?
What does that mean? Surf I guess.

What’s your favourite breed of dog?
What are the little ones called? Little ones.

Are you right or left handed?
Right handed.

How often do you get your haircut?
Once every two or three months.

What's the best freebie you've ever been given?
A PSP! Although I went to The Brits and all I got was a little badge and an annual. I was like 'Come on, this thing is £1,300 a ticket!'.

What's the hardest word to spell?
Hypochondriac or Onomatopeaia.

Who do you vote for?
I don't know. The mad hatters perhaps.

What's your favourite name for a girl?
Felicity or Phoebe.

What is the rudest word you know?
Cunt.

Have you got any tattoos?
Yep.

Will you please come and DJ at Club Popjustice?
Yes.

Girls Aloud or Sugababes?
Sugababes. No Girls Aloud. No, none of them or maybe one or two from each. It wouldn't be that Hayley from Sugababes or whatever she is called. I'd pick the other two from there and Sarah and Cheryl from Girls Aloud.

Are you getting bored of these questions yet?
No.

What do you like about Europe?
It's good. I think it's weird we don't have Euros, we live in Europe.

Did you expect the Robbie album to do better or worse than it did?
You'd expect it to do better, it's Robbie Williams.

New York, London, Paris or Munich?
New York. It's got to be America.

What does the Daily Mail mean to you?
Shit all.

What’s the best day of the week?
Friday.

At what age were you happiest?
That's got to be 16.

What’s wrong with pop?
Nothing.

What’s right with pop?
Everything, it's magical.

Are you good in a fight?
Yes. I'm brilliant in a fight. I could knock anyone out.

Are Oasis CDs mastered too loudly?
No. Nothing is ever too loud.

What’s the best location to park a caravan?
On a caravan site. Obviously.

What word do people correctly use to describe you?
Cool.

What is your favourite flavour of yoghurt?
Mississippi Mud Pie.

What is the most expensive thing you have ever bought?
A Vespa scooter.

What is your favourite fruit?
A 'nana.

What is your least favourite TV show?
I hate Basil Brush. I would happily burn him.

What was the last thing you read about yourself on the internet?
I read what The Sun said about me a few months ago. They had nothing to write about so they made some stuff up to slag me off. They said that my album did as badly as the Emma Bunton album which only sold about 3,000 copies, but mine sold nearly 150,000 copies. You can't really compare the two.

How long does it take you to do your hair?
It doesn't — I get out of the shower and put my hat on to flatten it.

Bath or shower?
Shower. It's horrible sitting around in your own dirt.

What is the appeal of cheese strings?
You can play with them. They legalise playing with your food without taking away any of the fun. It's like Babybel, you can use the wax to make a nose.

Would you rather have no teeth or no hair?
No hair.

Why do we have dreams?
Because otherwise we'd die.

The red pill or the blue pill?
The blue pill because then you get to be in the Matrix and be big and strong and stuff…

Dogs or cats?
Cats. You know I hate dogs. Actually, I hate them both, horrible furry things…

Did you get an invite to the Brit Awards?
I did. It was good.

What are the names of the people you live with?
Neil. Just Neil.

What do you have on your bedroom walls?
The Darkness posters and a dartboard.

Do you pair up your socks before you put them away?
Yes.

What did you do yesterday?
I played a charity gig with the Scissor Sisters for teenagers who are affected by HIV.

Christmas or birthday?
Christmas because you get food as well.

Biscuit or cake?
That's the hardest. You can't ask someone that! Cake.

When did you last Google yourself?
About a week ago. No one ever tells me what people are writing about me.

Which super­mar­ket do you shop in?
Tesco. I find it quite satisfactory.

Where do you buy your pants?
Soccer World, or 'chavland' as I like to call it.

Which reality TV show do you want to go on?
I'd like to do something fun. Big Brother is shit, it's good to watch but just sitting there doing nothing is rubbish. I suppose 'I'm A Celebrity' would be fun. I'd eat anything.

Are you going to play any festivals?
I hope so.

Three words that best describe you in the morning are…
Hyper as fuck.

The title of your auto­bi­o­graphy would be…
'Lil' Chris'.

Is Britney beyond saving?
Yeah, I think so really. I like the bald look though, it's good.

Do you care about a Spice Girls reunion?
Yeah, love the Spice Girls. I quite liked Ginger Spice, or Mummy Spice now.

Is it time for people to stop wearing stripes?
No. Stripes are cool.

Have you ever seen a ghost?
Yeah. It was a hanging man off a bridge when I went on a ghost walk. I'll bet you a grand I've seen a ghost. I'll ring my mate and he'll send a picture.

Have you ever fallen off a bike?
Yes. Every single day on the way to school, it was so humi­li­at­ing. I am shit at riding a bike. I like to bike really fast and I'd come off every single day.

What is the name of the first person you kissed?
I don't know, I can't remember.

Are you bored of these questions yet?
Not yet.

What is your worst injury ever?
I fell down a hill on my bike once and smashed my face into a fence at the bottom, got a face full of splinters and smashed my nuts on the handlebars.

What would people find out about you from a documentary?
That I'm a bit gross.

What is the worst thing you have ever eaten?
Probably ants, I got dared to and they tasted sour like acid.

Do you know any lesbians?
Do I? Yes, I do know a lesbian.