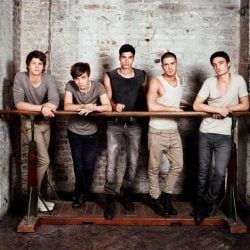 Tom Parker 'of The Wanted fame' has been banging on about how similar his band is to One Direction and The Beatles.

According to Holy Moly!, Tom has been saying that The Wanted are sharing One Direction's US success as part of yet another round of "Beatlemania".

"It's Beatlemania for both boybands, really. The whole boyband thing has really come back," he says.

"Us and One Direction have gone over to America and are literally [HE DOESN'T MEAN LITERALLY] just tearing it apart. The whole boyband thing is really alive, and it's good that it's two British acts doing it."

He also argues that the band's music was "a breath of fresh air" for the US, saying: "People in Britain liked the fact that we were very real… We were very 'say what we want' and we wanted to produce the music that we wanted to do. We took it to America and people really liked it."

The Top 5 dubious aspects of One Direction's 'Kiss You' video