That gimmick-free bit in The Voice where con­test­ants 'battle it out' in a boxing ring is to be turned into another singing show which will air on NBC in America.

The show will be called The Winner Is and will feature what Billboard politely refers to as "head-to-head singing duels", when in fact it's basically who can shout the loudest and for the longest.

There's a $1m cash prize for the eventual winner, but singers — who can be soloists or part of a group — can also negotiate deals with their opponents once the per­form­ance is finished and everyone's taken their ear plugs out.

Basically, you can be awful in the 'ring' but then bribe your opponent into walking with the prospect of winning some cash.

The show will be produced by Talpa Media USA, who produce The Voice in America, and John de Mol who is the creator of The Voice franchise. No details of when the show will air have been released yet.

Jay Z and Kanye West — No Church In The Wild 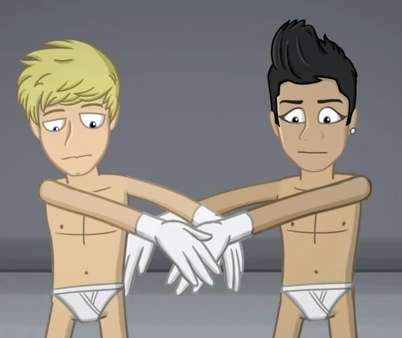 One Direction have been turned into cartoon characters