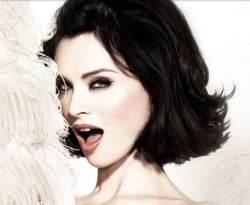 The 'I Am Not Good At Not Getting What I Want' hitmaker had a little chat with Metro about her next opus, saying: "[I have been] writing for my fifth record. I only started a month ago. I’ve been gigging all year and had a baby in April, which takes up a bit of time."

"I’ll pick up where the last one left off," she went on, "but it’s time for something a little bit different. At the moment, it’s a bit more wistful, a bit less dancey. I love dance music but you can’t be very reflect­ive with the lyrics – it’s a here and now thing. I want to talk about other things."

'A bit more wistful, a bit less dancey' isn't the most promising of starts, but we have faith in you SEB don't you worry.

We wonder what sparked this change in subject though?

"I’m 33, I’ve been around a bit as an artist, so it’ll be another diary entry of sorts. Writing songs about fancying people in dance clubs is all very well but it’s not the be all and end all. There are other topics."

So there you have it readers.

Rihanna has 'bagged' her 12th US Number One