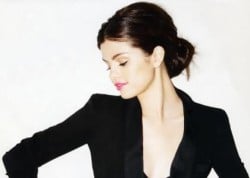 'Rock God' chanteuse Selena Gomez has confessed that her forth­com­ing album has been influ­enced by a "big turn" she had recently.

Having a chat to MTV News, and probably ref­er­en­cing her breakup with Justin Bieber let's be honest, Gomez explained: "I think for me it was actually inter­est­ing to see that towards the middle of me recording my record, a big turn happened to me and it was incred­ible to see how I applied that to music because I've never done that before and it's great."

"I think the older I'm getting the more I'm just kind of like I'm cool to share my side of the stories as much as I can, so I'm having a lot of fun," she continued.

If you're worried you might not actually get to hear any of this con­fes­sional blood-letting anytime soon, then feat not.

"March hopefully," Gomez said when asked when we might get to hear the first single. "Yes. I'm gonna say that because that's what I'm gonna make sure happens."

It would be funny if she was actually talking about a big tern, wouldn't it.