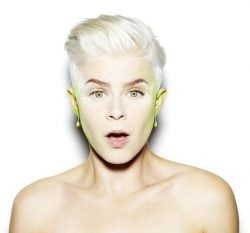 Robyn's said she's been listening to a lot of house music and hip-hop, which might influence her new songs, but basically she hasn't started writing anything yet so who knows.

She then went on to talk about what she's been listening to at the moment and how this might help her get on with it.

"I think there's some inspiring music out there that I'm listening to and I'm going back to a few things that I used to listen to, like house music that's softer. I lost faith in hip-hop a few years ago but I'm maybe having people convince me again."

"I love Metronomy's last album and a lot of house music," she continued. "I feel that's really inspiring at the moment and maybe there's something in there that will have an effect on the next album, but I really don't know because I haven't started writing so…"

GET ON WITH IT PLEASE ROBYN, CHEERS.