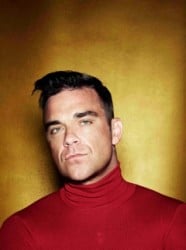 Robbie Williams expressed some opinions in regards his current standing in the music industry at last night's Sony Radio Academy Awards where he was performing.

Noticing Nick Grimshaw in the audience he added: "Isn’t that right Nick, you bastard?"

So that will help.