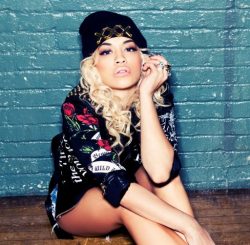 In fact, she said as much in an interview with Complex magazine (as quoted here). "I admire Rihanna. She works her ass off. She hasn’t had a break and she has given people hit after hit after hit."

"That work ethic and dis­cip­line is hardcore. That’s the kind of shit that I want to do. That I will do," she continued.

If anything, she's having quite a lot of fun playing on the fact that everyone thinks her and Rihanna hate each other, telling a story about when they were both in a club together and greeted each other with a kiss.

"People were like, ‘What the fuck!'" she explained. "Everyone thought that we hated each other, but the whole thing was created by the media. That’s what’s so funny."

will.i.am thinks Justin Bieber will be around for a while yet