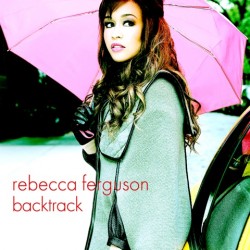 Rebecca Ferguson is going to release 'Backtrack' as a single on October 14. Previously the song was tacked onto a 'US Edition' of 'Heaven', and the 'songbird' is releasing a 'repackage' of her debut album on October 15 to coincide with the single's UK release.

'Heaven: Deluxe Edition' is touted as featuring five new tracks, but actually only two of them are new: a ditty entitled 'I'll Count The Days', which will be featured in Downton Abbey, and  'Good Days, Bad Days', which sounds like it might very well be about Zayn Malik's on/off rela­tion­ship with Twitter.

She's also chucking on her covers of Drake's 'Take Care', Aqualung's 'Strange and Beautiful' because let's face it you might as well.

The 'Backtrack' single artwork shame­lessly rips off the Parasol Moment in the video for 2NE1's 'I Love You' which someone is probably writing a 'trend piece' about as we speak.