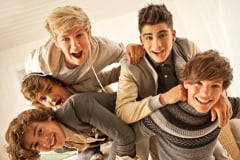 Tony 'Gold — GOLD!' Hadley out of Spandau Ballet claims that One Direction should have closed the Olympic opening ceremony.

Anyway, the 'For Your Blue Eyes Only' hitmaker talked about this (as found here), saying: "If I’m honest I would have liked a really young band to have closed it. If you’ve got Sir Steve Redgrave handing over the torch to the young­sters, it would have been nice to have had One Direction. They’re our biggest export at the moment, pure pop."

"One Direction with the Royal Philharmonic, with about 100 singers in a choir, behind them," Hadders went on to dream. “To me that would have been the new gen­er­a­tion kind of thing.”

Quite a vision he has there, right viewers?

Elton John and Muse were going to duet for the Olympics