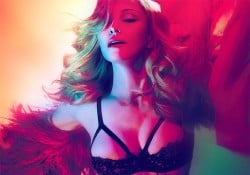 A fairly per­func­tory teaser clip for 'Turn Up The Radio' has appeared on the internet (via Daybreak).

The video was shot in Florence and Barcelona during gaps on the MDNA Tour and the clip features Madonna sitting in a car being followed by some fans who cheer a bit here and there.

'Turn Up The Radio' is out on August 5 and will in no way save the album campaign we're sorry to say.