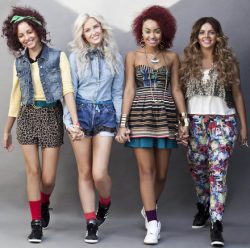 Jesy from Little Mix has claimed the 'girls' have become an inspir­a­tion for people being bullied online.

Nelson — who was the victim of some nasty things said on various forums — told BBC's Newsbeat that she's started to realise that for "every one bad comment you get, there's a thousand good comments" (tell that to Parade) and that the rest of the band were like her "sisters, literally".

She also said she'd had a call from Cher Lloyd who told her to ignore all the negative comments, which is jolly good advice if slightly arrogant and blinkered in the long run but there you go.

JLS — Do You Feel What I Feel?

JLS have announced their arena tour dates for spring 2012