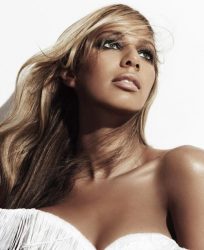 Global Songstress Leona Lewis has announced via UK celebrity site DigitalSpy that she'll be releasing a new EP in time for Christmas.

The three-track EP — which doesn't have an official release date yet — will be promoted by per­form­ances on both the US and UK X Factor, as well as an appear­ance at the Queen's annual piss up, the Royal Variety Performance.

We imagine the two per­form­ances on The X Factor were organised before the whole 'Collide' fiasco, but still it's nice to be reminded of Leona's singing and not just her ability to pose in front of horses in Essex.