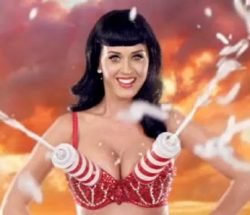 Katy Perry is releasing another single from the 'Teenage Dream' album, making it nine (NINE!) in total.

So far it looks like 'Hummingbird Heartbeat' will only be released in Australia, but who knows given the way this eight-decade campaign has gone so far.

For some reason someone's recorded an Australian radio DJ talking about the single which you can listen to below should you not actually believe it's happening.

The 'mentors' on The Voice US will never be replaced