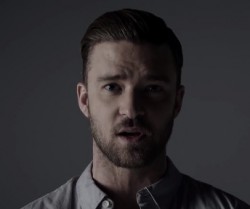 Michael Jackson MTV Video Vanguard Award 2013 Recipient Justin Timberlake has given the world a brief insight into his artistry via some #content called The 20/20 Experience 2 of 2 Promo.

In an email sent to his mailing list and titled 'An Open Letter (2 of 2) To You The Fans', Timberlake talked about how the two albums were recorded in just 20 hours and how exhil­ar­at­ing it all was etc, before linking to a video of him 'in the studio' with Timbaland and various real musicians.

It also suggests that he's not done with the whole behind the scenes stuff as there's a 'making of' video' "coming soon…".

Also, look out for some amazing Timbaland face around the 1:30 mark.

Sky Ferreira's put a bit of a new song online