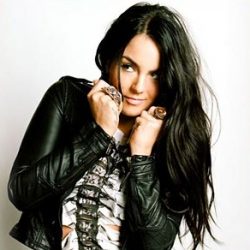 First 'mooted' in 2007, 'Jumping Trains' was due to feature recent smash 'Disaster', but as she told Billboard, it just "didn't feel right anymore".

New recording sessions have been taking place with Noah "40" Shebib, with single 'Demonstrate' the first example of her 'new' sound.

"We came up with something I'm really proud of and it felt like the right thing," she explained. "I'm shooting the video for it the first week of August so I'm just getting mentally and phys­ic­ally prepared for that and really con­cep­tu­al­iz­ing and being in the studio and creating."