JoJo is (somehow) finding inspir­a­tion in the 'novel' 'Fifty Shades Of Grey'.

The 'How To Touch A Girl' chart-stormer opened up about this whole thing to MTV News, saying these exact words: "I will say reading 'Fifty Shades Of Grey' kind of inspires me, it inspired my work."

"It's some freaky shit," the singer insight­fully added, before dropping the bombshell that "there might be something on this album inspired by 'Fifty Shades'."

JoJo has also been "listening to a lot of 90s music, including Aaliayah and Genuine" (who isn't?!) with the album coming either at "the end of the year or early next year".

"It really doesn't matter to me. I just want it to be right, we want to the set up to be right," she added.

To be honest she probably just wants to finish reading the 'Shades' books. 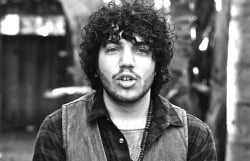 Benny Blanco has been writing for, and "vibing" with, Bruno Mars