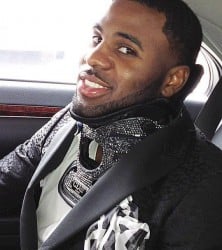 "It's about living for today. It's about being knocked down but being able to get back up," Derulo said of the album title during a chat with Vibe.

Mind you, it's more than just a word that will go next to his name on the album artwork — it's an entire mindset and one that manifests itself in Derulo's choice of neck brace.

It is a lovely neck brace.

Paris Hilton's new single will be out next month