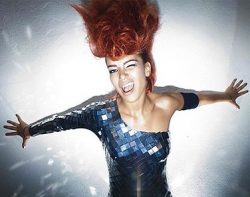 Eva Simons has spoken to MTV about tourmates LMFAO and she basically thinks they're better than they actually are.

Discussing the music of SkyBlu and RedFoo, she said: "You know, everybody's always saying when there's a party song out, 'I can write that song.' Well, can you? Try it! It's not that easy."

This is a bit rich coming from someone whose solo career was launched by a song people thought was by Rihanna, but still.

Scissor Sisters are doing a UK and Ireland tour in October