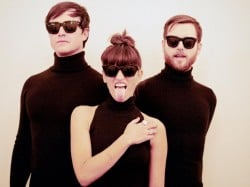 Dragonette have said they might release their original version of the Nicola Roberts smash 'Lucky Day' at some point.

Talking to Rolling Stone, bassist and producer Dan Kurtz revealed that the original sounded more like Blondie and that it was only made "dancier" once Roberts' label got involved.

"She spent a LONG time at our house; we wrote a bunch of songs with her," Kurtz continued. "She'd come over and just be herself."

He's also hopeful that she'll be a pretty amazing popstar for a while yet: "The amount that she knows about music and thinks about music is great – I think it means she'll have a long career."

Scissor Sisters — Only The Horses

Nelly Furtado, Flo Rida and will.i.am are all playing an Isle of MTV thing