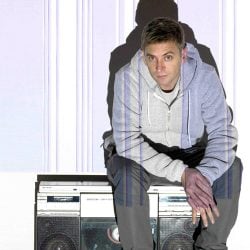 DJ Fresh has been updating the world on his recent activ­it­ies, including 'revealing' that he's had to turn down some "amazing oppor­tun­it­ies" to con­cen­trate on his own album.

Firstly though, he went on a bit of a holiday: "Recently I've been on holiday for a bit. I really needed a break after last year, it was pretty full on."

Right, but what have you been doing after that, Fresh?

"I'm just getting back in the studio now and I'm trying to start work on my own stuff. There's a lot of anti­cip­a­tion for what I'm going to do next. It's like 'what are you going to do now?'"

"So I'm really trying to focus on doing my own stuff and that obviously means turning down some amazing oppor­tun­it­ies, that I hope will still be around in a few years."

He wouldn't talk about who or what those oppor­tun­it­ies were, but he did then say he's worked with Ellie Goulding recently, which sort of implies she shouldn't be included in the "amazing oppor­tun­it­ies" bracket.