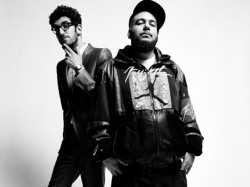 'Drive Time', the band's fourth album, has a running time of just 183 seconds, comprises 55 tracks and is said to explore political themes.

“When we first came out they made this big deal about us being a Judeo-Arab duo, and we’re not seen as a political threat,” says lead vocalist and guitarist Dave 1.

The album aims to promote the idea that the extensive length of an album makes no dif­fer­ence as long as the message is clear: "All Killer. No Filler".

Rihanna is the new face (and body) of Nivea