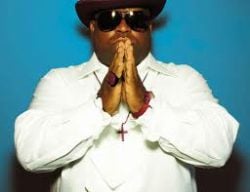 Following in the footsteps of sports music trail­blazer Kelly Clarkson, Cee Lo Green has signed on to sing the theme for Thursday Night Football (American football, not the proper one).

Billboard reports that the NFL is referring to this recording as a "Fanthem", as fans will be invited to send in clips of them­selves to act as the visual every week. The song itself will be the lyrics of 'I Love Football' set to The Ramones' 'Blitzkrieg Bop'.

A toe-tapper, to be sure.

"I really love my football," Cee Lo said in a not-at-all doctored statement. "The NFL always brings us the biggest and brightest enter­tain­ment spectacle in sports and now with 'Fanthem', NFL Network gives loyal fans the chance to par­ti­cip­ate!" The exclam­a­tion point is Cee Lo's emphasis, not ours.

Stop all the clocks: Carly Rae Jepsen is no longer Number One in America