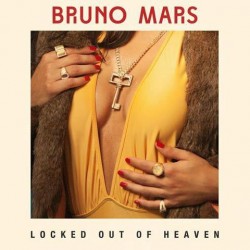 Bruno Mars unveiled his new single 'Locked Out Of Heaven' last night during a Google+ 'hangout' (!).

He's since plonked it on the internet so we can all have a listen.

During the chat he 'revealed' that his favourite lyric on the single, which sounds 'a bit' like The Police, is "but swimming in your water is something spiritual" and that the forth­com­ing album 'Unorthodox Jukebox' is "sensual, sensual and sensual".

He also let slip that he'll be hosting and per­form­ing on Saturday Night Live on October 20, so that's exciting for him.

Another version of Lady Gaga's 'rap' song has appeared online

One Direction have been chatting about working with "one of the best lyricists of our generation", Ed Sheeran