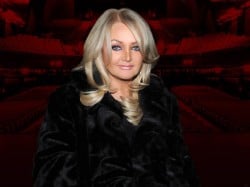 Up and coming balladeer Bonnie Tyler has 'revealed' that she was first asked to to Eurovision back in the 80s but turned it down because she was so suc­cess­ful at the time.

"I was first asked to do Eurovision by the BBC in 1983," she told The Sun. "I was in America at the time where I was Number 1 for four weeks so it wasn’t the right time."

(She was totally eclipsing the chart.)

"But this is the perfect time," she continued, sort of admitting she's not got much else on. "The BBC heard 'Believe In Me' and thought it was an incred­ible oppor­tun­ity for such a good song. I wasn’t expecting such a reaction."

Asked what she thought of last year's per­form­ance by Engelbert Humperdinck, she added: "I watched Eurovision last year from my place in Portugal. I think Engelbert had a bad night. I don’t think the song was the best for him. It didn’t have any oomph."

Mind you, if it all does go tits up for Bonnie it's fine because she hasn't been given any extra tickets for her friends and family to be there with her.

"I have been asked by quite a few people but there are no tickets left. I won’t have any support there apart from the BBC!"

Here's a picture of Beyoncé sitting on a small motorbike